There’s stunning news coming out of Baton Rouge Tuesday evening. Starting LSU Tigers quarterback Max Johnson will no longer be a member of the program.

Mere days after the Tigers hired former Notre Dame head coach Brian Kelly for the same role, Johnson announced that he has entered the transfer portal.

This isn’t exactly great news to start the Kelly tenure in Baton Rouge. It will also lead to questions about his ability to retain key recruits and holdover members of the Tigers’ program moving forward.

A four-star recruit out of Georgia in the Class of 2020, Johnson played exceedingly well for an otherwise pedestrian Tigers team this season. He’s thrown for 2,814 yards with 27 touchdowns against just six interceptions. It will be a difficult hole for Kelly to fill moving forward.

As for Brian Kelly and LSU, Garrett Nussmeier is the only scholarship quarterback on the roster heading into the Texas Bowl against Kansas State.

As for holdovers, wide receiver Deion Smith entered the transfer portal after the former four-star recruit from Mississippi recorded 11 catches for 186 yards as a freshman. 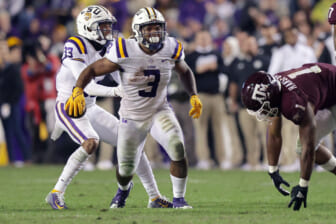 The son of former NFL quarterback Brad Johnson, this incoming junior will have a ton of interest on the transfer market.

He received offers from Auburn, Florida State, Georgia, Miami, Michigan, Ohio State and Tennessee when being recruited out of Oconee County High School in Watkinsville, GA. Any number of these teams could end up being interest in Johnson’s services. However, we’re likely looking at a program that values traditional dropback quarterbacks. At 6-foot-5, Max Johnson is just that.