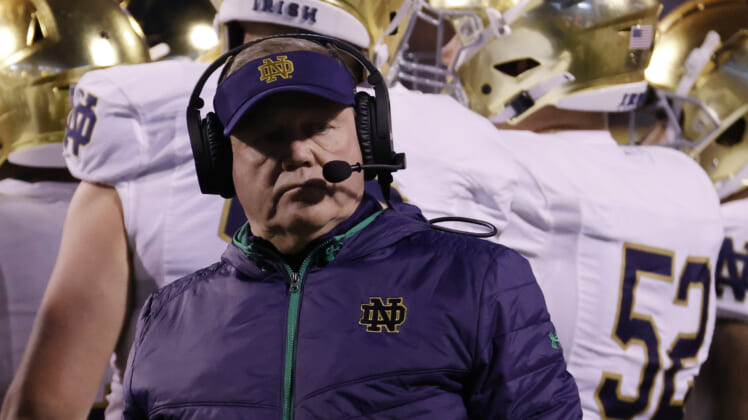 The last few days around the college football world have been insane when it comes to coaching. That could now include Notre Dame’s Brian Kelly.

According to Pete Thamel of Yahoo! Sports, the LSU Tigers are expected to name Kelly as their next head football coach within the next few days.

Reports earlier on Monday indicated that LSU was targeting Kelly to replace Ed Orgeron, who is no longer with the program after the two sides opted to part ways earlier in the season. It also comes after the Tigers missed out on Lincoln Riley, who left Oklahoma for USC over the weekend.

For Brian Kelly, this has to be seen as a somewhat shocking move. He has the Fighting Irish at 10-1 on the season and could very well earn a third College Football Playoff appearance in four seasons. Overall, Notre ame has posted a 113-40 record since Kelly took over back in 2010. That includes a 54-9 mark since the en of the 2016 campaign.

Some might conclude that this is a lateral move for Kelly. With that said, the south is ripe with recruiting and LSU’s academdic standards are not in line with Notre Dame. Those could end up being two determining factors as Kelly makes his way to Baton Rouge.

We’ll obviously have more updates on this developing story once they become available.