When the Indianapolis Colts acquired veteran quarterback Matt Ryan in a trade last week, it was just the continuation of wholesale turnover at this position in Indy.

When Ryan is under center Week 1 of next season, it will represent the sixth consecutive year that the Colts have had a different starting quarterback to open things up.

For general manager Chris Ballard and Co., the expectation is that Matty Ice will end this run.

“I wanted to make sure Matt knew that there’s no doubt it’s going to be two years. And I think we’ll go from there. I think we’ll know. I think both parties will know as we move forward.”

Chris Ballard on Matt Ryan situation, via Joel Erickson of the Indianapolis Star

This type of communication had to be key ahead of Indianapolis pulling off the trade for Ryan with the Atlanta Falcons last week.

The Colts’ one-year experiment with Carson Wentz failed miserably. He was traded to the Washington Commanders earlier this offseason after struggling big time in 2021.

For Indianapolis, it’s all about getting some sort of long-term continuity at quarterback following the surprising retirement of Andrew Luck ahead of the 2019 season.

Ryan sat down with Sportsnaut late last season to discuss his NFL playing career and a commitment to the Falcons. While things changed dramatically between the former NFL MVP and his original team, Ryan didn’t sound like a man nearing retirement.

Ryan’s 2021 performance was his worst since all the way back in 2015. However, it must be noted that he was dealing with a talent-stricken Falcons offense. Atlanta had traded Julio Jones the previous offseason. Fellow wide receiver Calvin Ridley sat out all but five games due to personal issues.

Set to enter his Age-37 season, Ryan still has a lot of football left in him. It’s in this that Ballard’s stance that the veteran will play in Indianapolis for at least two seasons makes sense. There’s also a financial component to this.

Shortly after acquiring Ryan last week, Indianapolis restructured the quarerback’s contract. That lowered his cap number considerably in 2022 while pushing some of the cap number back to 2023. ,

Financially, the Colts are linked to Ryan through 2023. In fact, they’d take a dead cap hit of $35.21 million if they somehow opted to move off him following this coming season.

Chris Ballard’s reputation on the line with Matt Ryan

Since Ballard took over as the Colts’ general manager back in 2017, they have earned two playoff appearances in five seasons.

Sure the shocking retirement of Luck following a 10-win 2018 season played a major role in this.

With that said, it’s a black eye in Indianapolis that the Colts are now going to start a sixth different Week 1 quarteback in as many seasons. The decision to sign Philip Rivers ahead of the 2020 season, only to see him play one year, is a concrete example of this.

However, it’s the Carson Wentz trade that set this organization back some. The Colts ended up giving up their first-round pick in 2022 and change to acquire him from the Philadelphia Eagles last offseason. 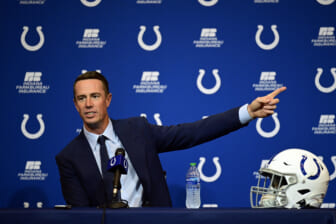 In return, Wentz turned in a disastrous end to the 2022 season while finding himself at odds with the organization prior to being dealt to D.C.

If Matt Ryan can’t solve these problems in 2022 and beyond, it will tell us a lot about Ballard’s future in Indianapolis.