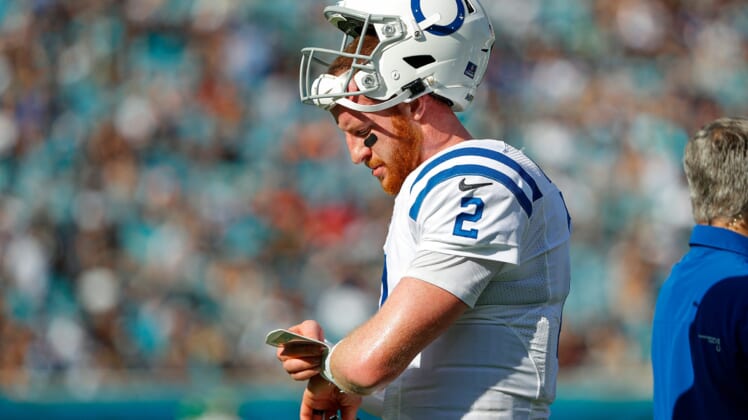 Veteran quarterback Carson Wentz will now be on his third team in as many seasons after the Indianapolis Colts traded him to the Washington Commanders ahead of NFL free agency.

Wentz lasted just one season in Indianapolis after general manager Chris Ballard and Co. dealt away a 2022 first-round pick and change to the Philadelphia Eagles for the enigmatic signal caller.

Rumors of a major rift between Wentz and the Colts’ organization gave in to Wentz throwing away the team’s season in a Week 18 loss to the hapless Jacksonville Jaguars. At that point, it became a foregone conclusion that he had played his last snap in Indy. Below, we look at four winners and losers from the Carson Wentz blockbuster.

The fact that Indy was able to acquire a third-round pick in 2022 and another third-round selection in 2023 for Wentz is pretty remarkable. After all, there were rumors that Indy was going to release him outright if it did not find a trade partner.

Interestingly enough, the third-rounder Indianapolis acquired in 2023 can turn into a second-round selection should Carson Wentz meet pretty realistic conditions. The Colts also moved up a few spots in the second round while creating a ton of cap room by trading Wentz.

Sure there’s now a hole to be filled at quarterback in Indianapolis. But the team now has draft capital and the most cap room in the NFL to add a signal caller on the trade market. It’s in this that the team has been linked to Jimmy Garoppolo.

Loser: What are the Washington Commanders doing?

We get it. Washington offered up the house for Russell Wilson before he was traded from the Seattle Seahawks to the Denver Broncos. We also understand that Wilson wouldn’t waive his no-tade clause and the Seahawks were against moving him to the NFC.

Even then, exhausting important draft capital on a quarterback who has gained a certain reputation is not a great look for a Washington team that’s been in the news for all the wrong reasons recently.

“As for the Colts, the issues with Carson Wentz stretched back to before the season began, one source said, and over the course of the year, some grew frustrated at what they deemed a lack of leadership, a resistance to hard coaching and a reckless style of play, which had a role in several close losses this year.”

These are some of the same things Sportsnaut has been hearing over the past several weeks. A quarterback without leadership skills is not going to up the level of play of his team. For someone like Colts head coach Frank Reich, who had been close to Wentz, to recognize this after one season. Well, that’s not great.

The Denver Broncos and Washington Commanders are now out of the market for a quarterback. This leaves multiple quarterback-needy teams vying for a starter in what is now a watered-down market. Given San Francisco has made it clear the team will trade Jimmy Garoppolo, most figured his market was going to be weak. That’s no longer the case.

Consider this. Garoppolo is seen as the antithesis of Wentz in that he’s a team leader and has widespread respect from those he goes to battle with. He’s been a clear winner throughout his career. He has a reasonable contract.

All of this leads us to believe that the 49ers were major winners in the Carson Wentz trade. They’ll see multiple teams battling for his services leading up to the 2022 NFL Draft. Respected much more than Wentz in league circles, Garoppolo could reasonably land the 49ers multiple second-round picks in a trade — enabling the team to acquire some of the assets they gave up for new starter Trey Lance.

Foolishly, Washington somehow believed that Wentz offered the team an opportunity to compete with the Dallas Cowboys and Philadelphia Eagles in the NFC East. While that might not paint the Commanders in a great light, it also has an impact on the 2022 NFL Draft class at quarterback.

This has been seen as one of the weakest classes in recent history. Even after some strong performances from Desmond Ridder and Malik Willis during the NFL Scouting Combine, this remains the case. Selecting 11th overall, Washington was in the market for a quarterback. That might no longer be the case. If so, it’ll be interesting to see how Round 1 plays out late next month.