What if Marshawn Lynch Doesn’t Report?

The idea that Seattle Seahawks running back Marshawn Lynch will not report to camp is hypothetical at this point. And as ESPN insider John Clayton indicated shortly after it was reported Lynch was holding out of camp, that said holdout would only last a few days.

John Clayton on NFL LIVE says Marshawn Lynch's holdout will probably be 5 or 6 days at the most and he likely will not get any new money.

Known for being a loose cannon off the field, no one in the Seahawks organization knows what Lynch’s next move is going to be. Head coach Pete Carroll even had this to say about the current contract stalemate and his starting running back (via ESPN.com).

We’ve had a substantial plan working for us for years now and Marshawn was a big part of this plan. Just a couple of years back we made a big statement and made a big effort for him and we wish that he was with us now

General manager John Schneider reiterated Carroll’s stance and made sure to publicly indicate that the Seahawks have no intentions of complying with Lynch’s contact extension demands.

Without being specific, obviously, we don’t talk people’s contracts,” Schneider said on 710 ESPN Seattle radio. “We all love Marshawn, but he made a decision not to be here.

It’s quite obvious Seattle has no plans to reward Lynch with a contract extension. Nor should it. At 28 years old and with a huge workload behind him, why would Seattle extend a player that still has two more years remaining on his contract? This doesn’t even take into account the fact that Seattle has a ton of decisions to make with youngsters such as Russell Wilson and Bobby Wagner, who figure to play more important long-term roles for the defending Super Bowl champions.

What would it mean for the Seahawks if Lynch decided to either sit out the 2014 season or retire altogether? This may be an unlikely scenario, but no one can pretend to assume they know what he’s thinking at this point. Pure conjecture here, but he could very well decide that going out on top makes more sense than a prolonged contract holdout and banging up his body even more.

In this unlikely case, the Seahawks would be left with youngsters Robert Turbin and Christine Michael as their top two running backs. They combined for 95 rush attempts last season. Neither one has proved he can be that guy to shoulder the load.

In terms of upside, Michael seems to possess the necessary skillset to be an upper-echelon running back in the NFL. The reviews that he’s received from some around the league tells us a story of a running back that could step into a starting role and take off immediately.

Have said B4..Strength coach at A&M, who trained both Michael and A.Peterson, told me Christine's athletic explosiveness is on par with A.P.

That’s some mighty high praise right there, but we need to take a step back before concluding that Michael can come in and produce like Lynch has over the past few seasons. Lynch represented 28 percent of Seattle’s entire offensive output last season. His 14 total touchdowns also accounted for 40 percent of Seattle’s entire touchdown total from a season ago. That’s not the type of production you replace with a running back who has just over a dozen career rush attempts. I don’t care how talented said running back might be.

Then you have Russell Wilson. Despite performing at a higher level than most quarterbacks in the history of the NFL in his first two seasons in the league, it must be noted that Wilson attempted the least amount of passes among regular starting quarterbacks last season. In fact, Wilson has put up 30-plus passes in a game just seven times in 37 career NFL starts, postseason included. While Wilson has performed well in those seven games (11 touchdowns and three interceptions), Seattle’s won-loss total (4-3) isn’t great when he’s forced to throw more.

This isn’t to say Wilson can’t be successful when asked to throw more or the Seahawks would ultimately decide to open up their offense with Lynch off the roster. Instead, it’s an indication that he simply hasn’t been asked to do it yet. That’s always a question mark, no matter how talented a quarterback might be.

Even more worrisome than the young quarterback struggling in a more pass-oriented offense, is the fact that Seattle’s offensive line just isn’t that good. Starting left tackle Russell Okung is currently on the PUP (physicall unable to perform) list and has missed 19 games in his four-year NFL career. Unproven commodities such as Michael Bowie and rookie Justin Britt are slated to compete for the starting right tackle job.

Bowie started eight games last season after Seattle made him a seventh-round pick in the 2014 NFL draft. For his part, Britt was considered a tremendous reach in the second round of the 2014 draft. Though, it must be noted that the Seahawks have been incredibly pleased with what they’ve seen from the Missouri product.

Then you have J.R. Sweezy and James Carpenter slated to start at the guard spots. Both are more than capable of holding their own, but neither represents above-average pass protection at this point in their careers. According to Pro Football Focus (subscription required), Carpenter graded out as the 65th-best guard in the NFL last year. Sweezy was better in pass protection, but he’s not what you would consider a great option at this point. 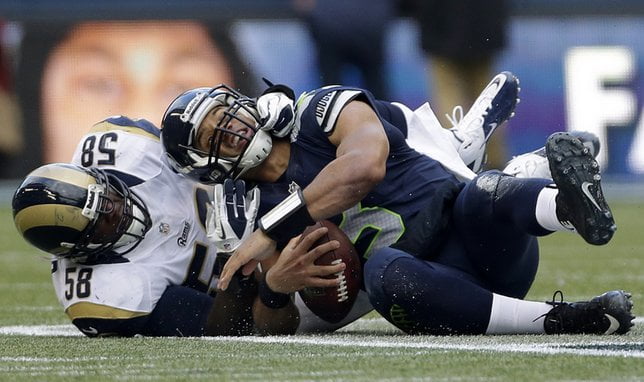 Courtesy of Mynorthwest.com: Wilson is elusive, but he needs his offensive line to step up.

Overall, Wilson was sacked 44 times last season. That means that he was sacked about 9.8 percent of the time he dropped back to pass. This isn’t an indication that Seattle’s offensive line is ready to step up, especially if Lynch isn’t with the team moving forward.

Of course, this is all based on conjecture more than anything else. There is no indication when Lynch will report. Based on how much money it’s going to cost him to remain a hold out, we can easily draw the conclusion Lynch will be at camp in the not-so-distant future. Then again, Lynch isn’t your normal football player. He marches to the beat of his own drum and is viewed more as an outcast around the league than anything else.

Should Lynch remain away from the Seahawks, it will have a major impact on the success of the team. That’s really hard to deny at this point. But I am pretty sure the Legion of Boom and Seattle’s defense is ready to do what is needed should its offense sputter in the event that Lynch isn’t around.