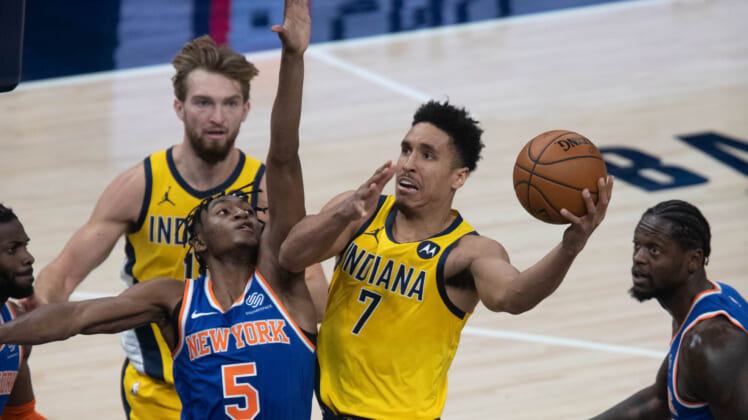 With youngsters Tyrese Haliburton and Chris Duarte, it’s just a matter of time before the Indiana Pacers pull off a Malcolm Brogdon trade.

Despite missing 46 games a season ago, Brogdon continues to play at an exceptional level when he’s on the court. He could end up being a major component for a contending team moving forward.

As for the Pacers, Haliburton and Duarte represent their future at the guard positions. Acquiring young players and/or draft assets for the 29-year-old Atlanta native has to be in the cards this summer. Below, we look at three ideal Malcolm Brogdon trade scenarios from the Indiana Pacers.

We saw Pelicans front office head David Griffin get busy ahead of the February 10 NBA trade deadline, acquiring C.J. McCollum in a blockbuster trade with the Portland Trail Blazers. This is one of the reasons New Orleans overcame a 3-16 start to the season to earn a playoff spot despite missing Zion Williamson for the entire campaign.

There’s no reason to believe that Griffin won’t continue to be active in building around the core three of McCollum, Williamson and stud forward Brandon Ingram. Brogdon would be an excellent addition at a need position next to McCollum.

In return for the veteran point guard, a rebuilding Pacers squad acquires 21-year-old wing Trey Murphy as the centerpiece. The No. 17 overall pick in last year’s NBA Draft, the Virginia product would be tremendous fit at the three next to Haliburton and Duarte moving forward. He displayed flashes of scoring brilliance in college and boasts a tremendous amount of upside.

Acquiring another future first-round pickt to go with the selection they got from the Cleveland Cavaliers for Caris LeVert would also loom large for front office head Kevin Pritchard.

Minnesota will be building around Anthony Edwards moving forward. There’s little doubt about that after he led the team to a surprise playoff appearance in 2021-22. It also seems unlikely that Karl-Anthony Towns will be moved this summer despite some postseason struggles.

If those two things are true (they are), finding a better fit next to Edwards than D’Angelo Russell has to be in the cards. It’s why the embattled point guard has already been rumored to be on the outs in the Twin Cities.

There wouldn’t be a better fit for Minnesota than bringing Brogdon into the mix. He can score. He can dish the ball. He plays pretty good defense. In turn, Minnesota flips Russell in another trade to either find a defensive-minded big or a wing to fill out its core.

Naz Reid would be a very underrated fixture in this hypothetical Malcolm Brogdon trade. The former LSU standout has morphed into a pretty strong player in three NBA seasons — averaging 9.5 points and 4.2 rebounds on 49% shooting. He’s still only 22. Adding a first-round pick in the 2022 NBA Draft (19th overall) and second-round selection (40th overall) would help Indiana expedite its rebuild.

Point guard has been a bane of the Knicks’ existence dating back eons. Derrick Rose was not able to fix the issue. Included in this hypothetical trade, Quickley seems to be more of an off-guard. It’s an area front office head Leon Rose must address if New York is to rebound after a disastrous 2021-22 season. Getting Brogdon on the cheap would be a coup. That’s especially true when it comes to his below-market deal.

We love the idea of New York teaming Brogdon up with stud young wing R.J. Barrett. And if the team can get assets for Julius Randle, a retool of this ilk could lead to a playoff appearance in 2022-23.

Indiana might not have a need for another guard, but Quickley would add value in a separate trade. Rather, the idea here is to get the best possible pick in a trade. That would include the Knicks’ unprotected 2023 first-rounder.