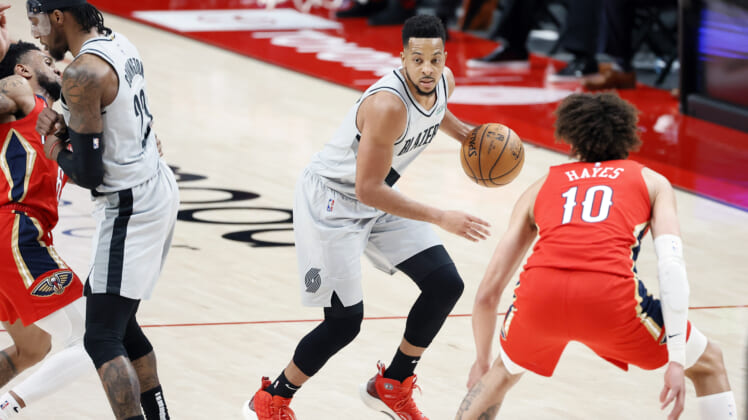 The New Orleans Pelicans are looking to make a huge splash before the NBA trade deadline and reportedly could be finalizing a blockbuster deal for Portland Trail Blazers star CJ McCollum.

Adrian Wojnarowski of ESPN first reported Tuesday that Portland and New Orleans were engaged in serious discussions on a potential trade. Now, per The Athletic’s Shams Charania, the two sides are finalizing the first blockbuster deal before the NBA trade deadline.

The official deal, per Wojnarowski, will send Josh Hart, Nickel Alexander-Walker, a future first-round pick, two second-round picks along with Tomas Satoransky and Didi Louzada to Portland. In exchange, the Pelicans receive McCollum, Larry Nance and Tony Snell from the Trail Blazers.

McCollum, age 30, has played for the Trail Blazers since they drafted him 10th overall in the 2013 NBA Draft. Recognized as a close friend of teammate Damian Lillard, Portland is making its biggest move before the deadline to restructure its roster.

In exchange for McCollum, New Orleans is sending Josh Hat and draft compensation to the Trail Blazers. Hart’s contract, with a $12.64 million AAV, will help match a portion of McCollum’s salary and give Portland some financial relief.

The Pelicans have coveted a primary guard to serve as a complementary scorer alongside Brandon Ingram and a healthy Zion Williamson. After a dreadful start to the 2021-’22 NBA season, New Orleans now holds the No. 10 spot in the Western Conference and is a legitimate contender to compete in the play-in tournament.

McCollum, under contract through the 2022-’23 season, fills the biggest need in the Pelicans’ lineup. While there is still no timetable for Williamson’s return, this is both a short- and long-term boost for the franchise.