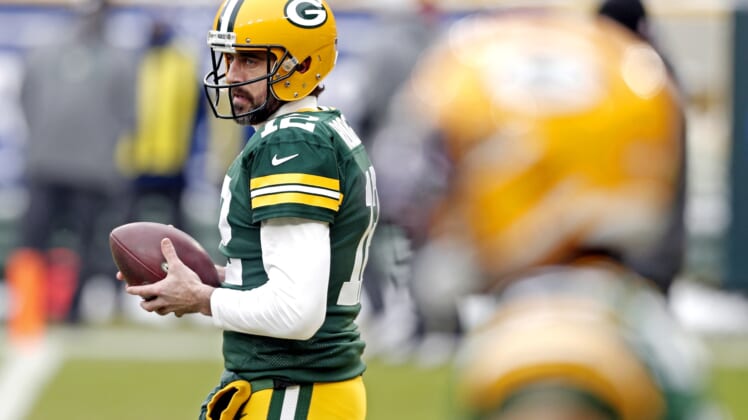 Los Angeles Rams rumors leading up to Saturday night’s blockbuster trade for Matthew Stafford had concluded that the team was not happy with Jared Goff. –

The new Detroit Lions quarterback has struggled over the past couple seasons after leading Los Angeles to a Super Bowl appearance following the 2018 campaign. No one in their right mind believed a Rams team that lacked draft picks and salary cap room could pull off a Stafford trade.

Even then, it looks like Los Angeles’ brass had a bigger target in mind.

Sam Farmer of the Los Angeles Times reported Sunday that the Rams made a run at Rodgers. Green Bay was “adamant” that it would not trade the likely NFL MVP, pretty much ending conversations on a dime.

Following Green Bay’s loss to the Tampa Bay Buccaneers in the NFC Championship Game, Rodgers made some news in his post-game presser by questioning his future with the Packers.

While the future first-ballot Hall of Famer has attempted to walk his comments back, it’s led to rumors that the Super Bowl quarterback is unhappy in Wisconsin. This comes less than a year after the Packers selected quarterback Jordan Love in the first round of the 2020 NFL Draft.

Despite all of the rumors, it’s clear that Green Bay has no intention of trading Rodgers. Whether he forces the team’s hands moving forward in the offseason remains to be seen.

Rams rumors suggest Matthew Stafford could be a long-term option

Following the Rams’ trade for Stafford, reports broke that they are looking to sign the former No. 1 overall pick to a contract extension. Stafford, 32, is signed through the 2022 season at $27 million annually.

Los Angeles’ interest in Rodgers also makes it clear that the team isn’t looking for a stopgap option under center. That’s a good thing given the fact that the Rams now don’t have a first-round pick until 2024. The last time they selected on Day 1 was back in 2016 when the team drafted Goff.

As for a Rodgers trade, it’s clear that any team looking to acquire the elite quarterback would have to give Green Bay the farm. That’s especially true after the Rams sent two first-round picks, a third-round pick and Goff to Detroit for Stafford.

Purely hypothetical, but it would likely take three first-rounders to pry Rodgers from the Packers. That’s only if Green Bay changes its stance moving forward. Right now, there’s no evidence of that.