The Los Angeles Lakers boast one pick in the upcoming 2021 NBA Draft. Whether they actually keep said selection after a disappointing first-round exit in the NBA Playoffs remains to be seen. A trade could be in the cards on draft night.

Continue reading for a Los Angeles Lakers mock draft, along with a couple alternative prospects they could consider in Round 1 and what blockbuster trade scenarios are in play for them on draft night.

The Lakers could potentially look to package this pick with Kyle Kuzma to find an upgrade at point guard. Recently, Lonzo Ball has come up in NBA trade rumors in a sign-and-trade deal with the Pelicans. If Los Angeles stands pat, this combo guard from Gonzaga could make sense. Ayayi averaged 12.0 points and 6.9 rebounds on an absurd 58% shooting for the Bulldogs a season ago.

Los Angeles is in need of help in the backcourt with Dennis Schroder and Talen Horton-Tucker set to hit free agency. Sure the team would love to re-sign Horton-Tucker, but the market is going to dictate that. Either way, getting younger with this combo guard would make a ton of sense.

This would be an absolute steal for a Lakers team that still needs some help in the low-post to go with Anthony Davis. While Andre Drummond could return, there’s rumors that he’s not going to take a discount to re-sign with Los Angeles. That makes a potential pick of the talented Jones even more applicable. In fact, the young man is much higher on most draft boards than where the Lakers pick. For good reason.

“Lethal rim-running threat: He’s a bouncy athlete who gets above the rim with ease for lobs, and a coordinated ball handler if he needs to put it on the floor to get to the basket,” Kevin O’Connor of The Ringer noted. “If he catches the ball from a standstill, he has the patience to use pump fakes to draw defenders, then the explosive verticality to score through contact.”

A big who can rise above the rim on lobs and make an immediate impact early in his career on that end. It almost makes too much sense for Los Angeles.

After what we saw from Dennis Schroder in the playoffs and not much depth behind him at point guard in Los Angeles, there’s a chance that the Lakers go for need at 22. If so, the 6-foot-5 Mann would make a ton of sense.

He was brilliant as a sophomore for the Gators last season, averaging 16.0 points, 5.6 rebounds and 3.5 assists on 40% shooting from distance. While being a shoot-first point guard might not necessarily be a great fit in Los Angeles, Mann has also shown an ability to run an offense. He’d be an immediate impact performer off the bench to go with fellow young guard Talen Horton-Tucker should the latter re-sign with Los Angeles in free agency. It almost makes too much sense.

Given that the New Orleans Pelicans control Los Angeles’ draft for the next four years after 2021, there’s a good chance general manager Rob Pelinka makes this pick without opting to trade out. This is magnified by the fact that NBA rules prohibit the Lakers from trading it until the selection is actually made on draft night.

Either way, there’s also a chance that these Lakers package the 22nd pick with Kyle Kuzma and a salary filler like Kentavious Caldwell-Pope to add another starter-caliber player. For his part, Kuzma is firmly on the trade block. It’s under this guise, we look at two ideal trade scenarios for the Los Angeles Lakers during the 2021 NBA Draft. 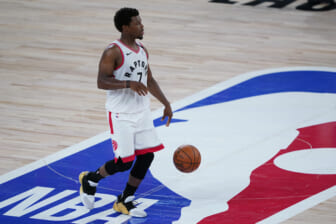 Los Angeles Lakers draft preview: Go all in or add a youngster?

Coming off a disappointing first-round exit in the NBA Playoffs, these Lakers are still in position to contend moving forward as long as LeBron James and Anthony Davis remain healthy.

That could lead some to believe general manager Rob Pelinka will flip the 22nd pick on draft night or shortly thereafter. With Kuzma as a trade chip, this could net the Lakers an upgrade over Dennis Schroder at point guard. That’s certainly something to watch. However, adding a youngster could also make sense given the aging core in Southern California.

Either way, this is going to be an interesting draft for the Lakers given the fact that they will be pretty irrelevant in the annual event from 2022-25.