The Los Angeles Lakers are in search of a play-making point guard after Dennis Schroder struggled big time in his first season with the team.

As much as injuries played a role for the Lakers in a 2020-21 season that culminated in a first-round exit in the NBA Playoffs, issues in the backcourt were also major factors.

Despite not boasting a ton of draft capital or cap room to add a top-end point guard, the Lakers continue to be linked to some of the bigger names on the market. Most recently, that included the potential of reacquiring Lonzo Ball.

Now that Schroder is a prime sign-and-trade candidate and Lowry is set to become a free agent, something might happen in this regard. Below, we look at four ways Los Angeles can acquire a star point guard to help LeBron James and Anthony Davis moving forward.

This scenario would include two sign-and-trades with Schroder heading to Toronto and Lowry finding his way to Southern California. While it might seem a bit convoluted, sign-and-trades give teams like the Lakers opportunities to pretty much get around NBA salary cap rules.

It’s actually rather simple. Assuming Schroder and Lowry sign for nearly the same amount, Los Angeles would then be able to sweeten the pot with Kyle Kuzma and its first-round pick in 2021 (22nd overall). All of this would be done under the assumption that the Raptors are not looking to tear it down and start anew with a rebuild after surprisingly acquiring the fourth pick in the NBA Draft lottery.

Rumors continue to persist that the Cleveland Cavaliers are looking to move Sexton. This is rather surprising in that the 22-year-old former top-10 pick showed out from a statistical perspective last season. Sexton averaged 24.3 points on a stellar 48% shooting from the field. However, the Cavs are picking No. 3 overall in the draft later this month and are seemingly against signing Sexton to a max-level extension.

As for the Lakers and a potential trade, Talen Horton-Tucker might make sense for Cleveland. He’s seen as a franchise cornerstone type player and is set to hit the restricted free-agent market. A sign-and-trade to team Horton-Tucker up with Darius Garland in the backcourt could work — enabling the Lakers to acquire a young player with star potential in the process.

Right now, Los Angeles has the non-taxpayer mid-level exception to work with. That’s expected to be roughly $9.5 million. Obviously, this wouldn’t be enough to sign someone like Kyle Lowry outright.

With that said, general manager Rob Pelinka and Co. could bank on a veteran attempting to join the still defending champions on a team-friendly deal.

Brooklyn Nets pending free agent Spencer Dinwiddie opted out of his contract and will hit the open market. It’s also being reported that he might want to return to his native Los Angeles. After suffering a partially torn ACL early last season, there’s a chance Dinwiddie takes the MLE to chase a ring. Goran Dragic (Miami Heat), Derrick Rose (New York Knicks) and Patrick Mills (San Antonio Spurs) are three other options.

This pretty much came out of nowhere recently with reports indicating that the Lakers are interested in reacquiring Ball after they dealt him to the New Orleans Pelicans in the Anthony Davis blockbuster. But the fit actually seems to make a ton of sense.

Ball, 23, put up a career-best performance with New Orleans last season — averaging 14.6 points, 4.2 rebounds and 4.8 assists on 38% shooting from distance. He’d be a marked upgrade over Schroder. 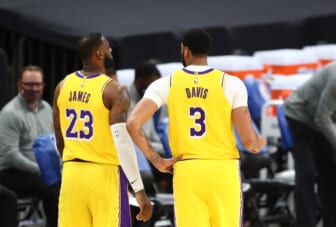 The idea here would be for Los Angeles to entice New Orleans in a sign-and-trade that would likely include both Kuzma and Horton-Tucker heading to the Bayou. Heck, it could even be expanded to include Steven Adams heading to Southern California with a cap-filler in Kentavious Caldwell-Pope as well as the Lakers’ first-round pick going to the Pelicans.