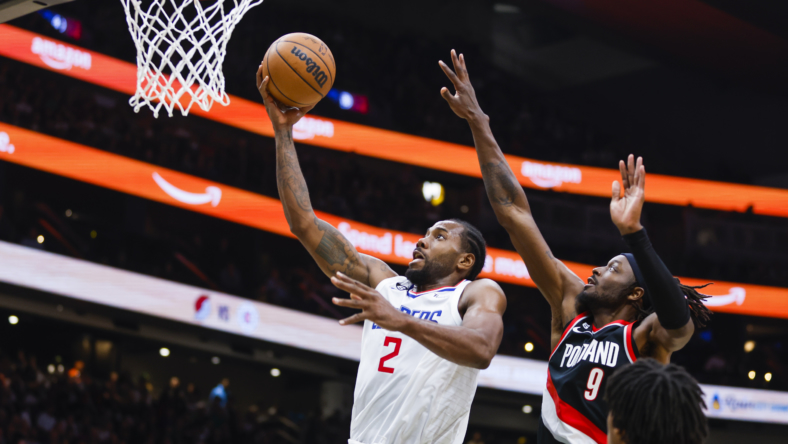 The Los Angeles Clippers moved to 2-0 in the NBA preseason after their 102-97 win over Portland. Stars Kawhi Leonard and John Wall made their return to the game of basketball and showed encouraging signs of comfortability and movement in their short minutes. The team in general looked deserving of their spot at the higher end of most power rankings, as the starters outmatched that of the Blazers.

Monday’s win gave fans a preview of what head coach Tyronn Lue has to work with this season. With all the speculation being about Los Angeles’ deep roster, let’s take a deep dive into the various players on the depth chart and rank the Clipper’s current roster.

Both Jason Preston and Moussa Diabate are “end of the bench” guys for coach Lue. Diabate is a rookie who is fighting for the backup center spot with camp invitee Moses Brown, while Preston is returning from a season of injury.

Together, they don’t share any high expectations nor should be on the court too much for the Clippers. Though, they are putting together a nice preseason and have the momentum to build on their slight opportunities.

Brandon Boston Jr. appears to be another second-round steal for Los Angeles. After being projected to be a top-five pick before the pandemic and a lottery pick closer to the draft, it’s a wonder how the lanky forward fell to the Clippers at the 51st spot. He shot 38.5% from the field and showed potential to be a solid bucket-getter. Boston has a smooth game and should benefit from another offseason of work with star forward Paul George and the now healthy Leonard.

Boston’s best performance came against his namesake, the Boston Celtics, where he scored 27 points in 25 minutes, shooting 69.5% from the field with five threes, also adding four steals.

Amir Coffey is the team’s youngest “three-and-d” threat and can be used almost anymore on the floor. He can guard one through four and knock down threes, ideally fitting into coach Lue’s desires.

With most of his career being a mix of NBA and League hoops, Coffey made his own way and finally earned a full-time NBA contract back in March. He recently added a three-year extension worth $11 million to his bank account, allowing fans to be confident when buying their brewmaster jerseys. 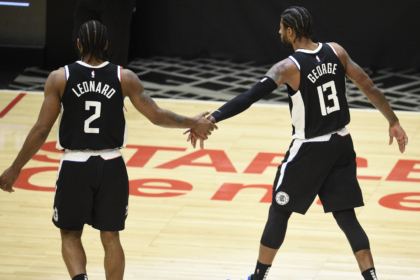 Even though the Clippers are crowded at the forward position, Coffey should still see minutes due to the team’s adherence to their stars’ load management and other reasons for absence that may arise.

Luke Kennard is Los Angeles’ official sniper. The Duke product led the league in three-point shooting, knocking down 44.9% of his attempts.

The ‘”Nard Dog” will have to battle his way onto the court as his services may be superfluous to a superb Clippers roster. His spacing ability is unmatched, as it is impossible to leave him open on the perimeter. However, his history of poor defending and health may limit him from being a consistent piece of coach Lue’s puzzle. It should be noted that he’s improved in both of these regards since being a member of the Clippers.

Kennard is a tricky player to analyze for the ’23 season since he is extremely talented, but not truly needed for Los Angeles to see success. 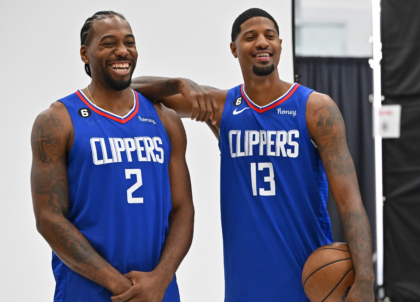 Over the last few seasons, Marcus Morris Sr. has been the “third guy” for the Clippers. Considering the team often has stars out due to injury, Morris’ ability to score the basketball has been vital to keeping the team afloat.

Since joining Los Angeles in 2020, he’s averaged 13.7 points and 4.2 rebounds per game. Not crazy numbers, but very serviceable — which is how Morris makes his money. The six-foot-eight stretch-four has taken a defensive decline over the years, likely attributed to his knee issues. It’s his defensive concerns that put Morris at number nine on this list because his scoring can’t keep up with his lapses on the other end.

John Wall is the wildcard (also wildcat) on this list. Until Monday, no one had seen the former All-Star play competitive basketball for over a year. In his last season of play, Wall provided the Houston Rockets with a fair 20.6 points, 6.9 assists, and 3.2 rebounds in 40 games. He shot 40.4% from deep and 31.7% overall.

Wall’s mentioned how he doesn’t have to be his team’s Batman every night as he used to in D.C. and Houston, and he can instead play the role of Robin. By this, he explains that he can now be a role player rather than the top option. Wall can easily rise on this list as time goes on, but right now he’ll continue to compete with current starter Reggie Jackson for primary floor general duties.

Terance Mann is the Clippers’ Swiss Army knife. He’s the combination of Nico Batum and Amir Coffey for the Clippers, but also has the ability to pound the rock. 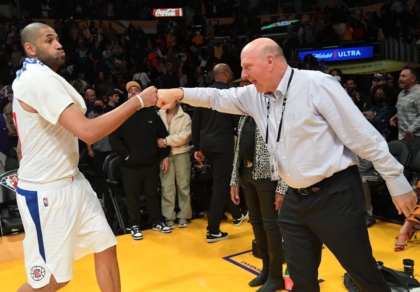 Mann, like Boston Jr., was a second-round pick that has paid dividends for Los Angeles. The guard-forward hybrid can guard one through four on the and has even been linked to potentially seeing minutes at center, per coach Lue. Although Mann isn’t the highest on this list, his impact soars higher than his stardom. Expect Mann to be in the team’s closing lineup because it never hurts to have a do-it-all guy on the court.

Acquired via trade with the Trailblazers, Robert Covington is the epitome of what kind of players the Clippers’ brain trust wants surrounding superstars Kawhi Leonard and Paul George. Covington can shoot from range with the best of them, while also being capable of guarding the opponent’s best player every night. He stands about six-foot-eight and is built to battle with bigs down low. “Roco,” as he’s known throughout the league, will play a key role during the Clippers’ run for a title. He’ll be used wherever Lue needs him to be, likely splitting minutes at the four and five. 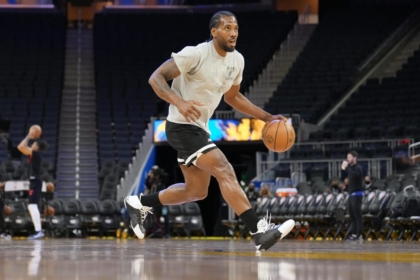 Like Covington, Batum is the ideal player for Los Angeles’ supporting cast. For two years, he’s been the glue holding the Clippers together and has proven to be one of the team’s more reliable, clutch players. Since signing a minimum deal with the Clippers in 2020, the French forward has shot 40% from three and has been an unselfish passer and playmaker. Similar to the mold of the roster, there’s no one Batum can’t defend and no shot he can’t take.

Perhaps the most underrated member of the Clippers, Norman Powell is the team’s new third scorer alongside Leonard and George.

Brought to Los Angeles alongside Covington, Powell brings with him 19 points, 3.2 rebounds, and 2.1 assists per contest (’21-’22). He features bouncy athleticism and can wreak havoc in the paint, adding a finisher skillset to a perimeter-heavy offense. He can also shoot the ball extremely well, shooting 54.2% from deep in his mere five games with the team.

Powell grew up in San Diego and attended UCLA, so he’s right at home in Southern California. 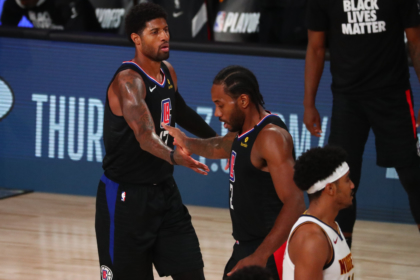 Ivica Zubac. There isn’t much to say other than he is all about his business, and has given the Clippers nothing but availability and production at the center position. He’s anchored the team’s defense for almost five seasons and sneakily improves each and every year.

It’s easy to get caught up in the team’s depth and latest acquisitions, but Los Angeles’ inability to find a better option at rim protector speaks volumes about the consistency that the seven-footer brings to the table. Zubac will have another year to meet slashers at the rim and to give Leonard and George security on the floor. Perhaps Zu’s greatest skill is sportsmanship, as he never complains when benched for matchup purposes.

As the Clippers’ proudest ambassador and leader, Paul George is back fully healthy for a revenge tour. The California native has been nothing short of dominant since the bubble woes and based on a few plays from the preseason, he looks scary good.

Like always, when “PG13” steps onto the floor, everyone knows things are about to get rated R. Even though he shares the spotlight (or streetlights as Ballmer says), George is the team’s unofficial frontman. He generally leads the way with media appearances for the team and fills in the blanks where no. 2 doesn’t.

Returning from an ACL tear that derailed the Clippers’ 2021 championship hopes, “The Klaw” knows that the time is now to bring a title to a different sector of Los Angeles.

The last time we saw the terminator, he was providing an unfair 30.4 points, 7.7 rebounds, and 4.4 assists in 11 playoff games. Kawhi was on a mission, and if he doesn’t go down, the team very well could’ve had its first ring. He or George can alternate roles depending on who’s feeling “it” each night, but George understands that when the game is on the line, Leonard usually gets the last word.

This fact alone puts Leonard at the top spot as the best Los Angeles Clipper in 2022-2023.