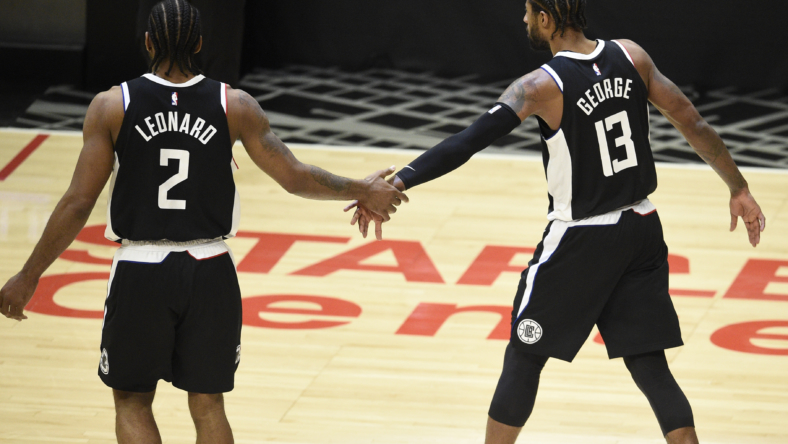 Los Angeles Clippers basketball is back. On Friday night in Seattle, WA, the team defeated Maccabi Ra’anana, 121-81, in an easy return to hoops.

Head coach Tyronn Lue benched all starters besides Marcus Morris, allowing the Clippers’ youth to dominate most of the action. Center Moses Brown led the way with 14 points and 13 boards, and Luke Kennard added four triples of his own to reach 16 points.

Fans also got a glimpse of Jason Preston, who missed much time with a foot injury (and surgery). He contributed 4 points, 9 assists, 8 rebounds, and a steal, which is solid for a 6-foot-3 guard.

However, the most captivation as of late comes from those who didn’t suit up on Friday night.

According to coach Lue, stars John Wall and Kawhi Leonard are good to go in Monday’s contest against the Portland Trailblazers, among other starters.

Los Angeles’ second preseason game will see Wall return to action for the first time in over a year. After he recently detailed his battle with injury and depression in The Players Tribune, expect his first minutes to be emotional. The veteran has been through a lot over the years, and it’s great for the sport to have such a talent back on the floor. Everyone should be rooting for the Wall-Star.

The same shall be said for Leonard. Following an ACL tear in the ’21 playoffs, he missed all of the past season. It’ll be his first run after more than a year, and like Wall, the NBA missed him.

Besides the fact that the Clippers are increasingly healthier, the team also has the opportunity to mesh together.

Since trading for Norman Powell and Robert Covington, the Clippers have had a league-wide perception of being “deep,” — with the addition of Wall being the icing on the cake. Though the team’s praise has been limited to being on paper, as not everyone has been healthy at the same time.

Monday’s game allows both fans and coach Lue the opportunity to see the Clippers’ latest edition of fully-healthy talent.

Coach Ty Lue is the biggest winner when it comes to a healthy team, considering he has no shortage of options. Besides wings Leonard and George, and center Ivica Zubac, Lue has to decide who to give the last two spots to between Wall, Powell, Morris, Reggie Jackson, Nico Batum, and Terance Mann.

Being forced to trim and change the distribution of minutes due to an overflow of talent is a great problem that any coach would want to have, but it is still a problem to an extent.

Clipper Nation should be excited

Monday’s preseason game, although meaningless to the team’s goals and aspirations, serves as a checkpoint to a hopefully long Clippers season. It’s hard not to be amped about what is brewing on the blue and white side of Los Angeles.

The Clippers’ Monday-at-7:30 showdown with Portland is one you do not want to miss.

Related: Projecting 5 Los Angeles Clippers lineups that could bring destruction and terror in ’22-’23