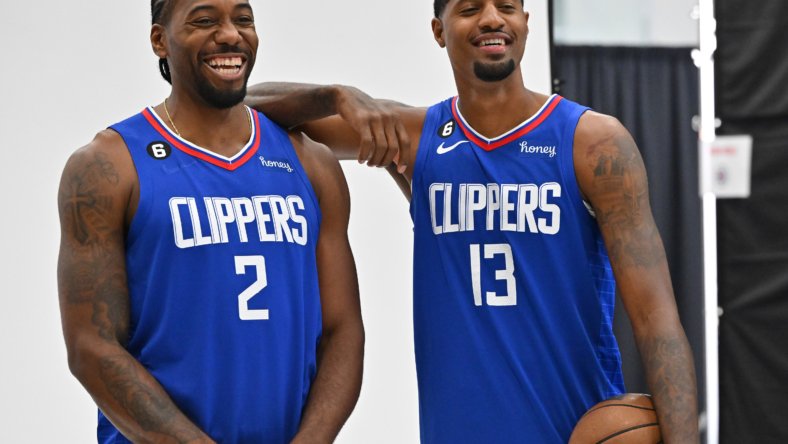 Until relatively recently, the Los Angeles Clippers didn’t sell out crowds, contend for titles, or routinely sit near the apex of power rankings. They were a joke for about 80% of their existence. Though, the Clippers have been one of the NBA’s better franchises over the last decade — taking huge strides under Steve Ballmer’s ownership beginning in 2014.

Los Angeles’ second team has fought hard over the course of its history and never saw consistent support or appreciation for its efforts. Let’s take a look at the greatest ever to rep the Clippers

The Clippers have many fan favorites: Patrick Beverley, Lou Williams, Corey Maggette, Darius Miles, Quentin Richardson, Jamal Crawford, Chris Kaman, Lamar Odom, and so on. Those named and unnamed (if you believe someone is missing, you are correct) were vital to the franchise and deserve their respect. Without them, the team’s history is even more empty.

Now, let’s look at those who made the real cut.

Leading the Clippers in games played, points scored, and minutes on the floor, Randy Smith is the O.G. Mr. Clipper. He repped the red, white, and blue during the 1970s, being one of the franchise’s early faces.

During his time, Smith set the NBA record for most consecutive games played, suiting up every night from 1972-1982 — a feat you won’t see in today’s era of load management. He also played many minutes alongside the team’s lone MVP, Bob McAdoo.

Smith averaged 17.8 points, 4.9 assists, and 4.2 rebounds as a member of the Clippers. His contributions will never be forgotten, as he paved the way for generations of talent in Buffalo, San Diego, and Los Angeles.

Definitely having the coolest name on the list, World B. Free comes in at number nine because of his ability to get buckets. Only in San Diego from 1978-1980, Free made his mark, scoring almost 30 points a contest.

Free was the runner-up in points per game in his two seasons as a Clipper and even netted All-NBA recognition. Most importantly, he was one of the franchise’s early superstars in Southern California.

He was known for being a flamboyant character and a breath of fresh air for some disappointing Clipper teams.

The team’s first number one pick in history, Danny Manning was arguably the best player to come out of the 1988 draft class. He rests fifth in points per game for the Clippers, averaging 19.1 points per game while he was there.

Manning led the team to two playoff appearances in 1992 and 1993. He also earned himself an All-Star appearance after shooting over 50% from the field. “Playoffs” and “All-Star” were rare for the Clippers of old, so he is cemented in the team’s history for providing success.

His time as a Clipper ended after he was traded for basketball legend, Dominique Wilkins.

As the first member of “Lob City,” DeAndre Jordan was a pioneer for fun in a franchise full of failure. His time in Los Angeles brought hope to Clippers basketball and saw endless “lobs and jams,” as Clippers legendary broadcaster Ralph Lawler would say.

The big man served as a Clipper for exactly a decade. He had an All-Star selection and an All-NBA first-team nod in the same year and played during the new era of Los Angeles’ playoff runs. With the help of the point god, Chris Paul, Jordan was always at the top of the league’s field goal percentage, hovering close to 70%.

Jordan was a defensive anchor in his prime. He averaged 1.7 blocks and 10.7 boards in 750 games. Essentially, you wouldn’t want to meet the second-round pick at the rim. Just ask Brandon Knight.

An underrated master of his craft, Elton Brand was a top big man during a time that consisted of Tim Duncan and Dirk Nowitzki. He played at the then-Staples Center for seven seasons, leading the organization to its first playoff series victory in 30 years.

Putting in work down low, Brand posted a double-double as a Clipper, averaging close to 20 points and 10 rebounds. He was an All-Star and produced much joy for Clippers fans next to Corey Maggette and Cuttino Mobley during the early 2000s.

Unfortunately, Brand’s domination in Los Angeles was ruined by a torn Achilles. He’d later make the ultimate decision to move on from the team.

All that’s missing from placing Kawhi Leonard at number one is tenure and/or a championship in Los Angeles. The Klaw is one of the best two-way players in the game and has been for some time, and he doesn’t need an introduction.

Before his torn ACL, Leonard was on a mission to bring the Clippers their first “Larry O.B.” He was playing the best basketball of his life, scoring at the same percentage as Shaq in the ’21 playoffs, but from tens of feet of a further distance.

Kawhi’s Clipper numbers are unreal: 26 points, 6.8 rebounds, with a career-high five assists. Alarming to the league, he’s now 100% healthy and has added muscle in the weight room, per reports.

Leonard will leapfrog into number one if he and super-co-star Paul George make it happen in Los Angeles.

Bob McAdoo is the organization’s only MVP winner. In 1975, the big put up an insane 34.5 points, 14.1 rebounds, and 2.2 assists per night en route to his prized possession.

He three-peated as the league’s scoring champion from 1974-1976 and trickled in some All-Star appearances.

McAdoo was truly the team’s first huge name. Today, he is the only MVP to ever win the award as a Clipper — and the team has had athletes such as Kawhi Leonard, Paul George, Blake Griffin, and Chris Paul sport the colors.

Although he played with six other teams, McAdoo will always be a Clipper great. It’s not every day an MVP walks through the doors.

The facilitator behind “Lob City.” CP3 was the one throwing lobs to Jordan and Blake Griffin, taking the game by storm. Paul continued his stardom as one of the NBA’s top guards during his time as a Clipper and helped push the team to new heights.

Paul leads the Clippers in all things passing, totaling 4,023 assists. He also ranks top 10 in scoring and rebounding, which is amazing considering his height of six feet.

The point guard helped the Clippers make the playoffs more times in his years there in comparison to their entire history.

As of late, CP3 has been on the franchise’s bad side as a member of the Rockets and currently the Suns. However, when he decides to hang it up, real fans will acknowledge his efforts and contributions to Los Angeles basketball.

As a Clippers fan growing up, PG13 is currently the main ambassador for the organization. Paul George is always seen in his team’s gear, and he is proud to be on the right side of Los Angeles.

George has worked hard to create a friendly, exciting environment for the team, and it has paid off. He’s attracted key free agents like John Wall and Reggie Jackson, and that’s before discussing his skills.

The point-forward can do it all, proving to be a knockdown scorer and filthy dribbler, both while being tenacious on defense. Since requesting a trade from OKC in 2019, George has sustained his close to usual 25-5-5 statline, and has improved in the playoffs over time.

Most impressively, he led the team to its first Western Conference Finals appearance. After Leonard went down with his ACL tear, the Fresno St. alum carried the team to monstrous comeback wins over Utah and pushed the eventual conference champion Suns to six games.

As it stands, no one has gotten the Clippers closer to a championship. Expect George and Leonard to battle for the top spot in the team’s history once they win the ring.

1. Blake Griffin is the greatest Los Angeles Clipper of all-time

He revived an organization that was believed to suck the life out of basketball. He led Los Angeles to six straight playoff appearances — which was unheard of in Clipperland until 2012.

The Blakeshow speaks for itself. He put your favorite player on a poster. He dunked over cars. He flopped and made people laugh. He was the franchise.

Griffin was a common All-Star in the 2010s, behind his 20-and-10 statlines and Rookie of the Year award. He developed his game throughout the years, moving outwards from the paint to the three-point line.

After signing a massive five-year extension to hopefully retire a member of the Clippers, he was traded away to Detroit for Tobias Harris and Boban Marjonovic. Though, the deal had to be done.

Today, Griffin is hunting for work. He’s lost mobility and is losing the battle against father time. Nonetheless, he’ll be one of, if not the first jerseys in the rafters for the Clippers. He deserves it as the best Clipper of all time.