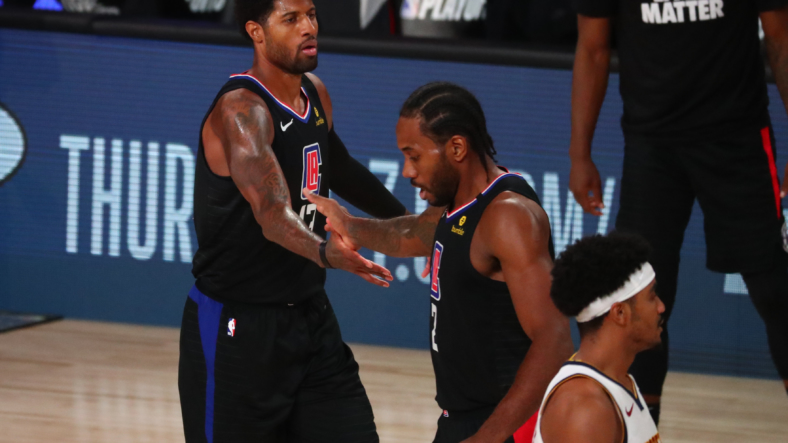 The Los Angeles Clippers are two seasons removed from being in the Western Conference Finals. Even wilder, the team was without their best player and managed to be just two wins away from contending for a title. But, times have changed — for the Clippers’ betterment.

Heading into the 2022-’23 NBA season, the roster in Los Angeles looks even better. Kawhi Leonard is returning, Paul George is healthy and John Wall will provide some much-needed scoring punch. There’s a lot that can happen with the talent and coaching assembled, creating intriguing possibilities for the season ahead.

Here are three bold predictions for the Los Angeles Clippers this season.

There’s a surplus of talent on the Clippers’ roster. Head coach Tyronn Lue has the option to go big or small, be defensive-minded or three-point focused, and so on. But, certain guys may fit better in certain lineups.

However, one guy can play anywhere with anyone at any time. His name is Terance Mann. Since seeing generous minutes in the ’20-’21 season, Mann has been available for 96% of games, proving reliable during the load management era.

Mann will be the Clippers’ best role player in 2022 because of his versatility and familiarity. His biggest strength is his defense. Learning from veteran Patrick Beverely over the years has turned Mann into a hound that covers all 94 feet. He can play guard or forward and also fly in like a hawk to protect the rim if needed.

Offensively, Mann is a work in progress that’s trending upwards. Throughout his last two seasons, he’s shot 38.1% from range, which isn’t bad at all for someone who shot 32% in college. He also demonstrates great finishing above the rim, with his best highlight to date being a poster on Rudy Gobert. Mann could score when needed.

As mentioned earlier, Mann is familiar with being the “glue guy,” and is no stranger to big games. He’s played in the bubble, deep rounds of the postseason, and has some play-in-game experience.

For these reasons, Mann will be the Clippers’ best role player around Leonard and George during the 2022 season.

Reuniting on the court after a year of layaway, George and Leonard are each primed to dominate. Both can score 30 points a night while providing top-tier defense, playmaking, and overall stardom. It’s good for the game to have them back at full speed.

Related: Why the Los Angeles Clippers bench could make them dangerous

The Clippers haven’t had a league MVP since 1975 when Bob McAdoo pulled off the feat. This is the season that changes.

Prior to Leonard’s ACL injury he was on his own tear, scoring north of 30 points a night during the ’21 playoffs, in addition to seven plus boards and some assists. More impressively, he shot a robotic 57% from the field and almost 40% from deep.

Without Leonard, George had to carry the team on his back this past season. He pushed through muscle tears and uncanny absences himself to give coach Lue 24.3 points, 6.9 rebounds, and 5.7 assists per game. Don’t forget his two steals a night either.

Together, they elicit fear into the league this year. Atop power rankings again, no one would be surprised if Los Angeles finishes at the top of the NBA standings.

If the Clippers do in fact finish number one in wins, and Leonard and George continue where they left off, then it’ll be extremely difficult for voters to not give the best player(s) on the best team the MVP award.

Los Angeles just won 42 games without a second of Leonard and only 31 games with George. The sky is the limit for a club adding two healthy superstars and John Wall — and that’s before mentioning mid-season acquisitions Norman Powell and Robert Covington. Sure, the West is crowded with competition. But, to be the best, you’d have to beat the best anyway.

The Clippers came close to the 60-win mark almost a decade ago, with Lob City winning 57 games in the ’13-’14 season. That team, unfortunately, ran into Kevin Durant and the Thunder, resulting in a Los Angeles second-round exit.

Steve Ballmer’s organization hasn’t reached 50 wins throughout the PG13-KL era, which is surprising to think about — but not when thinking of shortened seasons and injuries.

In 2022, the Clippers will hit the 50-win mark. And they shouldn’t stop anywhere close to that number.

Los Angeles will make history and finish with over 60 wins this season. The depth gives them no reason for less.