The Argentine superstar said his next move is not confirmed, but ESPN reports that he’ll join Paris Saint-Germain on a two-year deal with an option for a third season.

Despite several reports in recent weeks that the two sides had come to a contract agreement, Barcelona officials announced Thursday that they were parting ways with Messi.

At the Sunday presser, Messi expressed sadness over not being able to play in front of fans for his final Barca match. His last 18 months with the club were played in empty stadiums due to the COVID-19 pandemic. 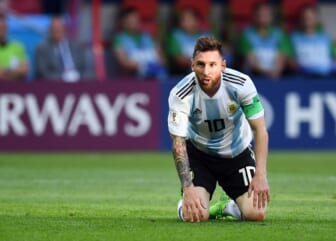 “Without a doubt, this is the most difficult time of my career,” Messi said. “I am really sad because I didn’t want to leave because this is the club I love. I didn’t expect this. I have never lied; I have always been honest and upfront. Last year I wanted to leave; this year I didn’t. That’s why I am so sad.

A move to Ligue 1’s Paris Saint-Germain would be a titanic development within the sport, as PSG is a regular title contender in the top division of French soccer and already boasts the talents of elite Brazilian forward Neymar and French forward Kylian Mbappe.

Messi reportedly offered to take a 50-percent wage cut with Barcelona. That cut would have still left the La Liga club over its spending cap.

The 34-year-old forward has made a virtually unparalleled impact on the sport while playing his entire professional career for Barcelona. He has earned a record six Ballon d’Or awards, annually presented to the top soccer player in the world, and helped Barcelona win 10 La Liga championships. He scored a club-record 672 goals in 778 games.