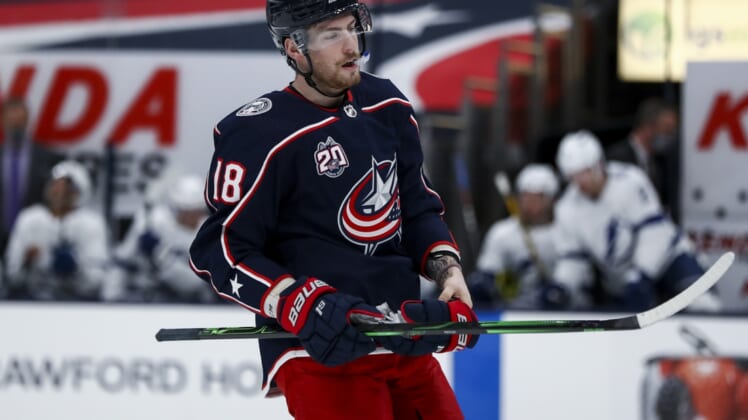 The Columbus Blue Jackets and Tampa Bay Lightning are heading in opposite directions as their two-game Central Division series prepares to end.

The Lightning won for the third time in three games with a 3-2 overtime victory on Thursday. The two sides meet Saturday afternoon in Columbus, Ohio to conclude what would be expected to be another slugfest of hard knocks, short-tempered, edgy play and strong goaltending.

While the Blue Jackets — winners just once in five games and on the losing side of consecutive overtime decisions — could have been wondering what happened against the reigning Stanley Cup champions, most of the attention turned to one Columbus player: Pierre-Luc Dubois.

The top-line center has found his way into coach John Tortorella’s doghouse, so much so that the Dubois problem has become a major issue within the organization and may necessitate a trade of the third overall pick in the 2016 NHL Entry Draft. Both Tortorella and Dubois said Friday that his playing status for Saturday was unknown.

Dubois, 22, skated just five shifts — 3:55 of ice time — in Thursday’s game, which Columbus tied in the third period on captain Nick Foligno’s power-play goal. Dubois sat on the bench in the final 40-plus minutes after his final shift in the first period.

Not having your top forward on the ice with the home opener on the line didn’t seem to be a problem for Tortorella.

“Told you,” Tortorella replied when asked about benching the Quebec native. “It’s not difficult for me, I’ve got to call them as I see them and just go about our business on the bench and try to win a hockey game.”

Foligno said he and Dubois — who declined to speak to the media afterward — have had conversations about the situation.

“My job is to play with who the guys are that are out there,” Foligno said. “He’s one of us until told otherwise.”

The strong goaltending and physicality of the teams’ first division contest resembled Game 1 of last postseason when the Lightning won 3-2 behind Point’s game winner in the fifth overtime — the fourth-longest game in NHL history.

The Lightning squandered a 2-1 lead in the third period before Point — on a cross-ice pass from defenseman Victor Hedman — chipped in the game-winning tally past Columbus goalie Joonas Korpisalo.

“I didn’t get all of it, but I was lucky enough it kind of bounced the right way and goes in. What a great feed by (Hedman),” Point said.

Tampa Bay has won eight consecutive games over the Blue Jackets in the regular season.

“We’re pretty used to each other,” coach Jon Cooper said. “Nine playoff games in the last two years. We’ve played them a lot. So we’re pretty familiar with each other.”

The most inconsistent part of the Lightning right now may be their schedule.

They are slated to play Carolina in Raleigh, N.C. next Tuesday and Thursday, but the Hurricanes had to postpone their two games this week against Florida due to COVID-19 protocol, casting doubt on next week’s play.