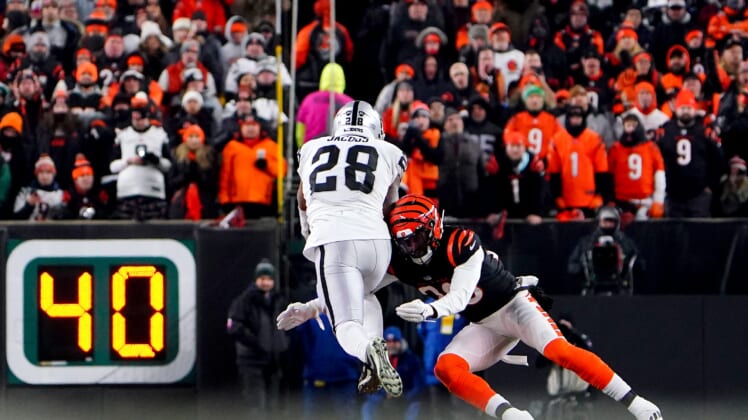 The Las Vegas Raiders wrapped up the spring portion of their offseason program Monday. They canceled the last day of organized team activities set for June 14. Now, the players and coaches have about six weeks of intermission before training camp.

Typically, teams and players don’t reveal a lot about plans for the upcoming campaign at this point in the offseason. However, rookies and unproven players usually have the chance to generate some buzz as veterans recover from injuries or take days off to get their bodies on track for a marathon between late July and January.

Several players didn’t participate in spring practices or missed sessions along with the way, but in the meantime, the coaching staff had a good look at some of the young talent in the trenches.

Let’s take a brief moment to highlight five players who either boosted their stock or lost some steam following OTAs and mandatory minicamp.

Lester Cotton Sr. has been on and off the Raiders’ roster and practice squad since he went undrafted out of Alabama in 2019. The 26-year-old has suited up for five games and played five offensive snaps, but the 6’4″, 335-pounder made a strong impression on the new coaching staff.

Cotton made the best of his opportunities in Denzelle Good’s absence. He took first-team reps through mandatory minicamp, per The Athletic’s Tashan Reed. Head coach Josh McDaniels said Cotton is “having a great offseason.”

Before you write off Cotton as a camp body again, he may have a shot to cling on to the back end of the roster if Good lost a step after his recovery from a torn ACL. Perhaps he outperforms rookie seventh-rounder Thayer Munford Jr., who transitioned from left tackle to left guard at Ohio State last season.

Cotton may be able to convince the Raiders’ new coaching staff that he’s more than a practice squad player.

According to Reed, the Raiders liked what they saw in the LSU product and fellow rookie defensive tackle Matthew Butler.

“Farrell’s physical traits jumped out immediately,” Reed wrote. “He’s every bit of 6-foot-4, 325 pounds, but he moves surprisingly well for his size. It’s easy to envision his potential as a space-filling nose tackle who can also create some interior pressure against the pass. He earned some first-team reps and was the more impressive of the two.”

Hankins isn’t on the hottest seat among starters who could lose their jobs, quite the opposite, but he’s not a slam dunk to play about 60 percent of the defensive snaps as he has in each of his four seasons with the Raiders.

Farrell may force his way into a decent role for his rookie term. If he’s able to penetrate the pocket on passing downs, the coaching staff may allow him to eat into Hankins’ workload.

Good needs more time to recover before he’s back on the field. Las Vegas Review-Journal‘s Vincent Bonsignore spotted the seventh-year veteran on the field during an OTA session in May.

In the 2021 season opener, Good tore his ACL. If you do the math, he’s a little over nine months removed from the injury, which is roughly the timetable for most players who make a full recovery. Barring any setbacks, the 31-year-old will probably rejoin the team for training camp in July.

With that said, Good could lose the inside track to a starting job. Guard John Simpson took reps with the first team, and as noted above, Cotton did as well. The latter isn’t likely to move up the depth chart to claim a starting spot, but if rookie third-rounder Dylan Parham looks ready to play right away, he can surpass Good in the pecking order at guard.

Ultimately, Good has to show he’s back to form following a significant knee injury at his age. If not, the youngsters will have an extended timeframe to showcase themselves with the first unit.

Josh Jacobs didn’t struggle through spring practices. In fact, local media didn’t really see much of him because he missed OTA practices open to the viewers, per Reed, and stayed inside while at team headquarters for mandatory minicamp.

Nonetheless, The Athletic’s Vic Tafur dropped a small but interesting nugget in his breakdown of the Raiders’ backfield committee.

“Jacobs and Drake will likely both be gone next year after playing out their contracts, and there is probably a decent chance Ziegler and McDaniels already think [Zamir] White is better than them,” Tafur wrote.

The front office declined Jacobs’ fifth-year option, which isn’t a surprise with the additional bodies in the running back room, specifically Brandon Bolden and White. However, if McDaniels already favors the rookie fourth-rounder (White), Jacobs’ workload could take a significant hit in 2022.

Jacobs will likely lead the Raiders’ running backs in carries, though he may finish with a thin margin over White, who’s the probable replacement.

Alex Leatherwood has the spotlight this offseason. The Raiders need him to improve, or they’ll have to rely on fifth-year tackle Brandon Parker, who gave up eight sacks and the second-most pressures on the team last year (53), per Pro Football Focus.

Thus far, the Raiders have given Leatherwood an opportunity to redeem himself at right tackle. While talking to reporters, he mentioned fundamentals and working on the basic principles of his job as an offensive lineman. The second-year pro went into detail about his hand placement, which underscores his focus on the simple things that will help him in the upcoming campaign.

Obviously, Leatherwood isn’t going to earn the position at the podium, though he seems to understand his shortcomings from the previous year and how to sharpen his technique.

At training camp, Leatherwood may slide inside to right guard as offensive linemen cross-train at different positions, but he took a majority of the first-team reps at tackle through mandatory minicamp, per Tafur. With the current roster, the 2021 first-rounder won’t battle an established veteran or a high draft pick for the job.

For better or worse, the Raiders have shown they’re not ready to give up on Leatherwood at right tackle despite his move to right guard after Week 4 of his rookie term under the previous regime. He’s the clear-cut front-runner to start on the outside.