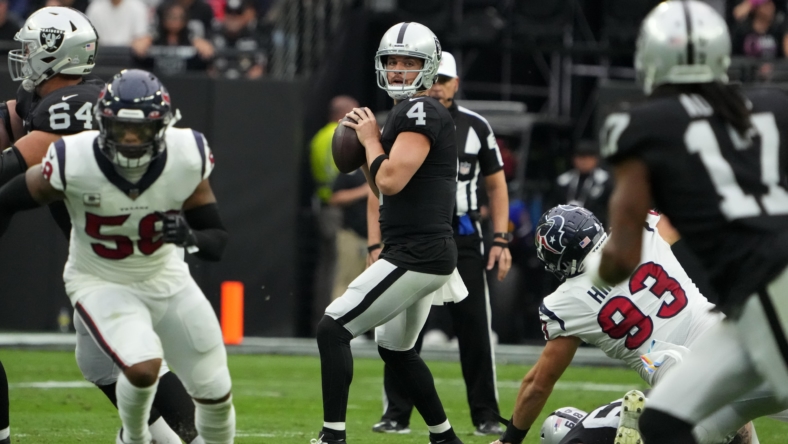 On Sunday, the Las Vegas Raiders begin a two-game, two-city road trip going to New Orleans followed by staying on the east coast for the following week in a matchup against Jacksonville.

In addition, this also kicks off a stretch where Las Vegas plays four of its next five games away from home.

Despite going on the road for a good part of the next month, the Raiders need to focus on taking it one game at a time as the heart of the schedule approaches.

Here are five things to watch on Sunday.

One of the questions offensively for the Las Vegas Raiders will be the presence of tight end Darren Waller, who is recovering from a hamstring injury and did not play in last week’s 38-20 victory over the Houston Texans.

Waller practiced in limited fashion on Wednesday and Thursday, so signs that he will play, barring any setbacks, are imminent.

Carr said despite not being able to build the chemistry in each of the team’s six games with the new scheme, his relationship with Waller is still strong with the preparation before the season began.

“We’ve had a lot of time in OTAs and training camp and games during the season. It’d be great to have everybody healthy and see what we can turn it into.”

If the 30-year-old tight end is playing on Sunday with the pass-catching trio along with wide receivers Hunter Renfrow and Davante Adams, it will be the first time since Week 2 all three players are playing together.

However, all three players are on the Las Vegas Raiders’ injury report as Adams did not practice Wednesday or Thursday due to an illness and Renfrow was limited on Wednesday but practiced fully on Thursday as he is on the report due to a hip issue.

Related: Las Vegas Raiders trade scenarios ahead of the deadline

The Raiders have shown its success in the running game with Josh Jacobs recording 523 scrimmage yards over the last three games, which is the most over a three-game span since Marcus Allen posted 576 scrimmage yards during the 1985 season.

However, not only has the running game led to success also when Carr fakes a handoff to Jacobs and gets ready to throw the ball.

Just showing the handoff forces opposing defenses to hesitate, which could be the difference between successfully completing a pass or not.

“It all starts with how we run the football,” Carr said. “When I turn my back and stick the ball out to Josh’s stomach, people have to believe it. It all stems from the offensive line and Josh going to work. If we want to keep doing that, we have to keep running the ball.”

This is where the run-pass-option plays are so crucial as the Raiders enter the seventh game of their new offensive scheme come Sunday.

Honing in on a strong New Orleans Saints defense

The Saints defense has a couple of star players to watch out for that includes a familiar face to the Raiders.

At the defensive line, the Saints are led by defensive end Cameron Jordan and linebacker Demario Davis, who both have each recorded 4.5 sacks so far this season.

Further in the secondary, the Saints have safety Tyrann Mathieu, who was a Kansas City Chief from 2019-21.

These three players will present a challenge for quarterback Derek Carr, as the 30-year-old signal-caller goes up against his first NFL head coach Dennis Allen since the two were on the same sidelines for four games in 2014.

“Especially with a coach like DA, just to move him around and be able to do things with him, intensify his skillset, he’s going to put him on display,” Carr said of Mathieu on Wednesday. “He’s made a lot of good plays over there, especially in Kansas City and he’s made plays here at New Orleans and it doesn’t surprise me. He’s one of the best safeties in our game.”

Las Vegas Raiders defense has to step up against Saints offense

New Orleans can attack teams in different ways. This week, quarterback Andy Dalton will get the start against the Raiders after reports saying Jameis Winston was healthy.

At the running back position, Alvin Kamara is a force not only while carrying the ball but also in the passing game in the flat.

Some of the Saints’ wide receivers have been banged, but one player who has been taking charge has been rookie Chris Olave, who was the 11th overall pick in the NFL Draft back in April.

So far in six games, Olave has recorded 32 receptions for 495 and two touchdowns. That sets up his averages for 5.3 receptions and 82.5 yards per game.

According to NFL’s Next Gen Stats, Olave ranks second in NFL with 16 average targeted air yards. This means that every pass intended for Olave is going about 16 yards, which translates to his 15.6 yard per reception rate this season.

In addition to the 2022 first-round pick, the Raiders’ defense will also have to watch for the Saints’ Swiss Army Knife, Taysom Hill, who has the opportunity to run, throw and catch the football.

Linebacker Denzel Perryman said preparing for Hill’s versatility will be a tough task for the defense.

One key difference on Sunday will be how effective the Raiders will be on third downs from both sides of the ball.

In last week’s victory, outside of the special teams penalties, the only setback was the third down defense.

The Raiders allowed the Texans to complete 9-of-15 on third downs. That will be something Las Vegas will have to correct this week, especially against an offense that averages 25 points per game.

Being able to get stops, whether it is from defensive ends Chandler Jones and Maxx Crosby or in the secondary with Rock Ya-Sin is going to be vital as this team ranks 26th with a 44% clip in allowing third downs.

Offensively, although the Raiders only had nine third down opportunities last week, Carr and the offense will have difficulty going up against the fourth-best third down defense in the NFL.