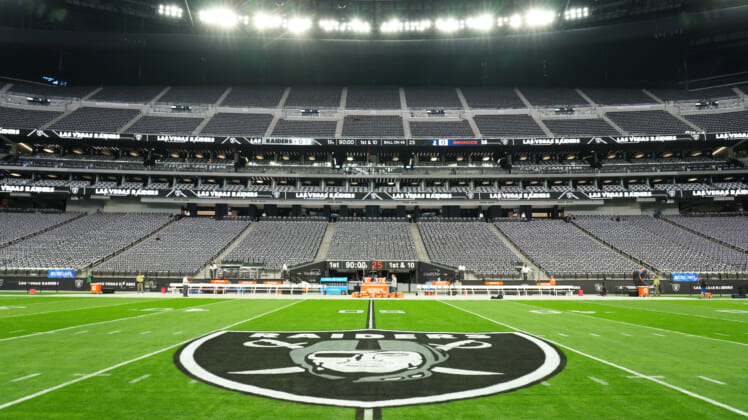 Leading up to the 2022 NFL Draft, we often hear about a simple approach, and that’s to pick the best player available. While it’s easy to say, team decision-makers must consider weaknesses across the roster while on the clock through the three-day selection process.

On Wednesday, Ziegler answered questions and provided insight into how the Raiders will continue to strengthen the roster through the draft. He said something that should’ve registered with fans as a turn in philosophy from the previous regime.

“We want the best available players regardless of position. That’s how we want to continue to build the team. I think if you’re drafting good football players, you’re making good choices. When you overextend just to draft a need, you can often pass over good football players that can help your team. That can be a slippery slope if that’s the way you approach it.”

Ziegler isn’t the first general manager to say this or something close to it. However, despite a few question marks along the offensive line, he’s positioned the team to go with the flow but make a move if necessary.

While many fans would like to see Vegas pick an offensive lineman who could potentially start at right guard or right tackle, they should prepare for the possibility that the club takes a safety or linebacker with its first pick in the third round. While those positions rank lower in the needs category, a second- or third-level defender may be the best player available on the Raiders’ big board. 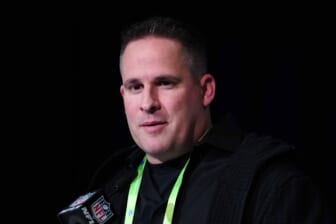 Why the Las Vegas Raiders can take BPA approach

With that said, Minnesota tackle Daniel Faalele, who’s an enormous 6-foot-8, 384-pounder with 35⅛” arms and 11-inch hands, seems like a dream pick for the Raiders. He has extensive experience at right tackle, plays with urgency in the run game and comes out of college without major durability concerns.

Unless Faalele or Kentucky’s Darian Kinnard remain on the board at No. 86, Ziegler should stick to his word and choose the best prospect available. With a defense that’s undergone notable changes at all three levels, the Raiders could add competition at defensive tackle and linebacker in case the newcomers struggle to fit within defensive coordinator Patrick Graham’s scheme.

Though the front office added multiple cornerbacks in Rock Ya-Sin (via trade with the Indianapolis Colts), Anthony Averett and Darius Phillips, all three players have one year left on their deals. Trayvon Mullen will also become a free agent in 2023. The Raiders can add another player on a rookie deal to the group with the intent to develop him into a starter in case the club turns over the unit next offseason.

Vegas only has two safeties on the books beyond the 2022 season. Tre’von Moehrig will likely continue to start, but Tyree Gillespie only played 13 defensive snaps through his 2021 rookie campaign. 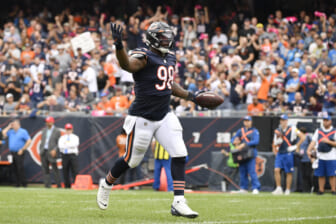 Looking at the defense, the Raiders need quality depth, and they have room for a new starter on the defensive line, safety (if Johnathan Abram struggles to fit in the new system) and linebacker in case Divine Deablo doesn’t progress in his second season. Rookies can compete with linebacker Jayon Brown and safety Duron Harmon in training camp battles.

Because the front office traded the team’s first- and second-round picks, the Raiders have no idea who’s going to be on the board once they’re on the clock. However, the wait gives Ziegler time to maneuver if the team has its eyes on a specific prospect.

Ziegler mentioned the possibility of a trade. 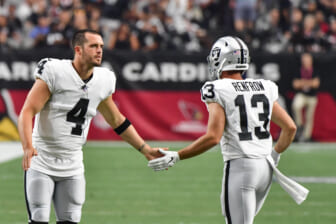 Clearly, Ziegler isn’t hyperfocused on the team’s roster needs, which may worry skeptics who see a subpar starting offensive line, but he’s probably aware of the options left on the open market, too.

All of the aforementioned offensive linemen can offer veteran insurance if the Raiders don’t adequately address the offensive line in the draft. Remember, Vegas gets an additional $19.75 million in savings late in the spring because the team designated Cory Littleton and Carl Nassib as post-June 1 cuts.

In the past, the Raiders invested premium picks into prospects who filled their biggest needs, and that didn’t pan out well.

Defensive end Clelin Ferrell, clearly overdrafted at No. 4 in 2019, will go into the 2022 season without a clear role as a backup. Back in November, the club waived cornerback Damon Arnette (No. 19 overall pick in 2020) after a disturbing video of him flashing a firearm and threatening someone on Instagram surfaced, but he struggled mightily before his release, allowing a 74 percent completion rate in coverage and missing 14 tackles in 13 games. Alex Leatherwood may get another shot to start at right tackle, but one can argue that the Raiders could’ve picked a better player at another position with the No. 17 overall selection last year.

Ziegler isn’t going to make the mistake of locking on to a position group and overlooking high-quality prospects, which may turn the tide in the Raiders’ recent draft record. If he’s able to find middle-to-late round gems like Maxx Crosby and Hunter Renfrow, the Silver and Black would have additional low-cost contributors to keep the roster competitive beyond the 2022 season.

As a general manager, Ziegler should consider the present, but he also has to keep his eye on the long-term future.