Las Vegas Raiders tight end Darren Waller was ruled out for the second half of Thursday’s game against the host Dallas Cowboys due to a left knee injury.

Waller initially exited the game with a back injury during the first quarter but soon returned. Then, he was tackled after catching a 21-yard pass and was seen grabbing for the knee with 12:33 left in the half.

He rode the bike on the sidelines and was examined at halftime before being ruled out by the team just after the start of the third quarter. 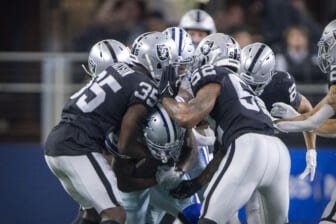 Waller had two receptions for 33 yards before being ruled out. He was coming off his second 100-yard outing of the season.

Entering the game, the 29-year-old led Las Vegas with 610 receiving yards on 51 catches, including two touchdowns, in 10 games this season.