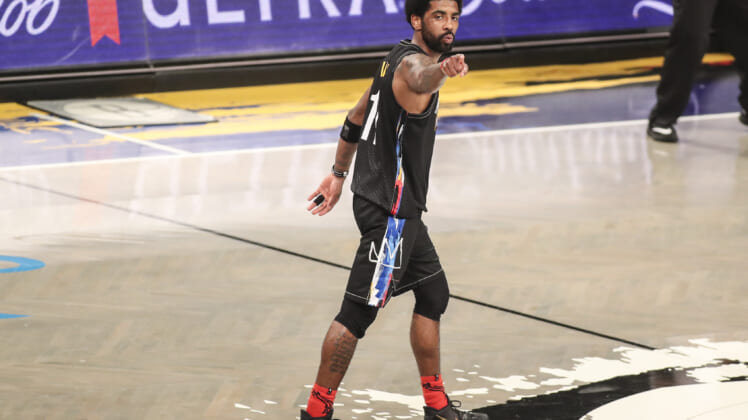 Brooklyn Nets general manager Sean Marks announced earlier on Tuesday that star guard Kyrie Irving would not be a part of the team this season until he changes his stance against the COVID-19 vaccinations.

Irving has remained away from the club through training camp and the preseason, primarily due to local New York City mandates that require vaccination proof for those attending large-scale indoor events. Up until Tuesday, it was not yet known how the Nets would proceed with the situation.

Fresh off Marks’ announcement, Kyrie Irving and his camp are now leaking new information about his anti-vaccine stance. To say that it’s rather interesting would be an understatement.

“Multiple sources with direct knowledge of Irving’s decision have told The Athletic that Irving is not anti-vaccine and that his stance is that he is upset that people are losing their jobs due to vaccine mandates. It’s a stance that Irving has explained to close teammates,” NBA insider Shams Charania reported. “To him, this is about a grander fight than the one on the court and Irving is challenging a perceived control of society and people’s livelihood, according to sources with knowledge of Irving’s mindset. It is a decision that he believes he is capable to make given his current life dynamics.”

“Kyrie wants to be a voice for the voiceless,” one source told Charania.

At this point, New York City officials are not planning on changing the current mandates — meaning that there’s a darn good chance Kyrie Irving will sit out the entire 2021-22 season. Charania also noted that he’s going to forego a $186 million extension that the NBA champion could have signed.

There’s a chance that Irving is dealt here at some point. According to the report, rival teams believe that the Nets would be “open to a significant trade offer” for the star guard. Unfortunately, his camp has threatened retirement if he’s traded — leading to a non-existent market for the guard’s services.

If Irving plans on making this his cause, it will certainly cost him in the pocket book moving forward. There’s also a decent chance that his NBA playing career could come to a conclusion as a result.

But as Charania noted, a source close to Irving doesn’t believe his stance is anti-science. That’s good to know!