WATCH: Kyrie Irving gets into it with New York Knicks fan 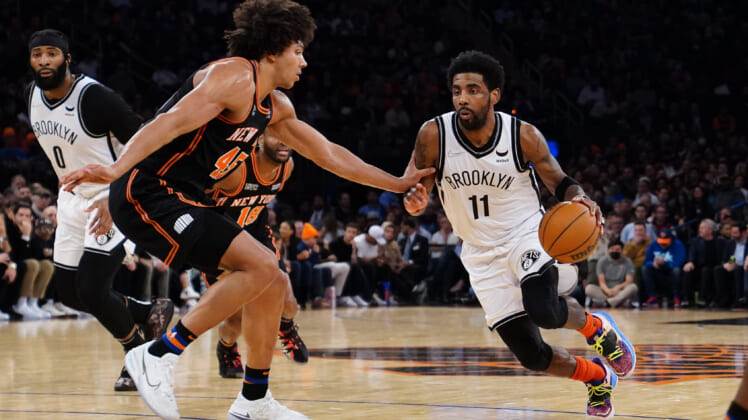 Brooklyn Nets star guard Kyrie Irving has been an enigmatic figure for pretty much his entire NBA career.

That has not changed recently with the former No. 1 pick being the representation of divisiveness due to his stance against getting the COVID-19 vaccine.

Finally able to play games in New York City after they ended their vaccine mandate, Irving and his Nets were taking on the New York Knicks at the fame Madison Square Garden Wednesday evening.

With his Nets down 17 at the half, it became clear that Irving was frustrated. Apparently, he decided to take that frustration out on a heckling Knicks fan as the guard made his way to the locker room at the half.

Check out this video of Kyrie Irving exchanging words with said fan before getting into his face.

That’s just not a great look for either Irving or the fan. No one outside of those two knows exactly what the man said to grab Irving’s attention. We’ll likely find out from the guard himself in the post-game presser.

All of this comes within the confines of the NBA 75th Celebration Game at MSG.

Kyrie Irving has a history with fans

It was back on May 30 of last year during a playoff game against the Boston Celtics, that Irving had a water bottle thrown on him by a Celtics fan in Boston.

Irving reacted to it by almost making his way into the stands to confront said fan. This came at a time when fans were being let back into arenas amid the COVID-19 pandemic.

The fan was immediately handcuffed and arrested by authorities inside TD Garden and was banned from attending Celtics games for life.

We just hope these types of incidents don’t repeat themselves once the NBA Playoffs get going here soon.