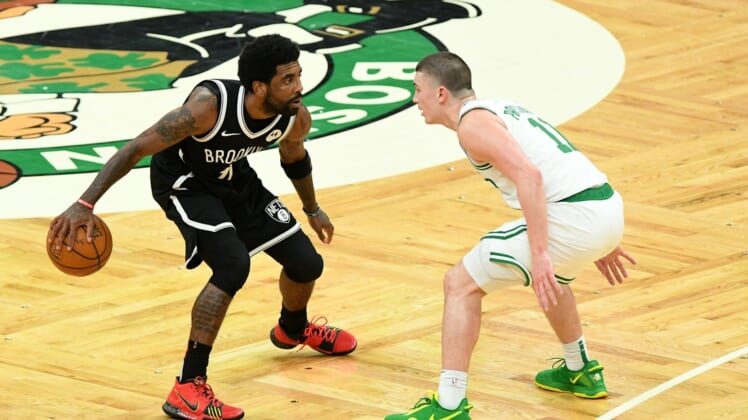 May 30, 2021; Boston, Massachusetts, USA; Brooklyn Nets guard Kyrie Irving (11) controls the ball in front of Boston Celtics guard Payton Pritchard (11) during the second half of game four in the first round of the 2021 NBA Playoffs. at TD Garden. Mandatory Credit: Brian Fluharty-USA TODAY Sports

A Boston Celtics fan was arrested and could face a lifetime ban from TD Garden after throwing a water bottle at Brooklyn Nets guard Kyrie Irving after Sunday’s game.

Cameras showed security officials quickly responding before the fan was led away in handcuffs. A report from Stadium said the fan had been banned for life from attending Celtics games, while other reports indicated that a lifetime ban was possible but not finalized.

The incident took place after the Nets pulled away for a 141-126 victory over the host Celtics to grab a 3-1 lead in their playoff series. Irving walked to center court and appeared to wipe his shoe on the Celtics’ logo before turning to head toward the locker room.

Before he could reach the tunnels, the fan hurled the bottle his direction. The bottle did not strike Irving, but it caught his attention, and he and several teammates stopped and had words with the fan.