WATCH: Kyler Murray, DeAndre Hopkins get into it on the sideline 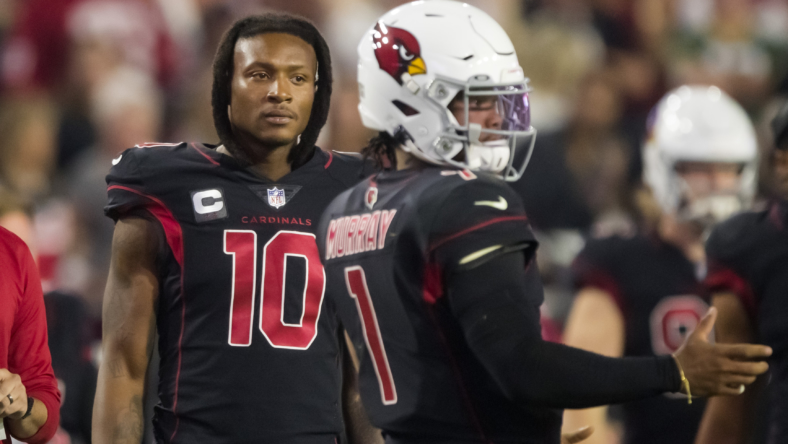 Kyler Murray and DeAndre Hopkins are playing just their third game together this season after the latter was suspended to open the campaign.

Heading into Sunday’s game against the division-rival Seattle Seahawks, the two had made sweet music with one another. In fact, Hopkins caught 22-of-27 targets for 262 yards in his first two games this season.

The Pro Bowl receiver also opened Arizona’s scoring with a 22-yard touchdown catch from Murray in the first quarter.

However, it appears that Murray and Hopkins were not on the same page as the first half continued. That included the two getting into it on the sideline with Arizona down 10-7 about midway through the second quarter.

This certainly is not a good look for a Cardinals team that’s 3-5 on the season and in last place in the NFC West. In reality, Sunday’s outing against the first-place Seahawks is a must win if Arizona wants to have a chance in the division.

Frustration taking over for Kyler Murray, DeAndre Hopkins and the Arizona Cardinals

Arizona has lost three of four heading into Week 9. In fact, its only wins on the season have come against squads in that of the Las Vegas Raiders, Carolina Panthers and New Orleans Saints who are a combined 7-18 on the season.

Not only is Murray under a microscope after signing a massive extension this past offseason, head coach Kliff Kingsbury is firmly on the hot seat.

As for Hopkins, he was involved in trade discussions heading into last week’s NFL trade deadline. We’re not 100% sure what’s going on there.

What we do know is that Arizona needs Kyler Murray and DeAndre Hopkins on the same page if it is going to break out of this funk.