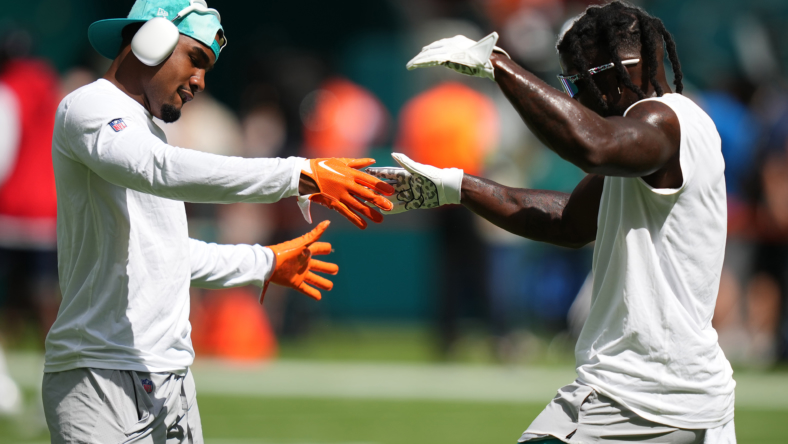 In a list that will be updated weekly throughout the 2022 season, we give you our NFL wide receiver rankings heading into Week 9.

Despite missing a game earlier this season, Pittman Jr. is on pace for a career-best season (117 catches, 1,267 yards). Over the course of the past three games, he’s hauled in 26 receptions for 245 yards.

The question now becomes whether Pittman Jr. will be able to produce at the same level with a green Sam Ehlinger having replaced Matt Ryan under center in Indianapolis. Pittman tallied just 53 yards on nine targets in a Week 8 loss to the Commanders. That could be an issue moving forward.

Olave makes his second appearance in our NFL wide receiver rankings after a three-game stretch in which he caught 24-of-32 targets for 244 yards.

Despite New Orleans’ quarterback issues, the first-round pick from Ohio State continues to perform at a high clip. In fact, he might very well be the NFL Offensive Rookie of the Year at this point. It helps when you’re on pace for nearly 1,300 receiving yards.

After some initial struggles, Lamb has picked it up big time recently. That included catching 5-of-7 targets for 77 yards and a touchdown in last week’s blowout win over the Chicago Bears.

Through eight weeks, Lamb is on pace for 89 catches and 1,181 yards. Unfortunately, Cowboys quarterbacks boast an average 84.0 QB rating and have thrown two interceptions when targeting Lamb. That keeps him relatively low in our latest NFL wide receiver rankings.

Right now, Cooper is actually on pace to put up the best performance of his career. Said pace has him set to haul in 82 passes for 1,175 yards and 11 touchdowns. Not too shabby.

How consistently good has Evans been throughout his eight-year career? He’s put up north of 1,000 yards each season, making him the first player NFL history to reach that plateau in eight consecutive years to open his career. It’s been even better for the 29-year-old Texas A&M product since Tom Brady joined the Bucs back in 2020.

It’s the catch rate that stands out the most. In Jameis Winston’s final season with Tampa Bay, Evans caught just 57% of his targets. In fact, his catch rate stood at 60-plus percent just once in his first six seasons. He’s simply become a more well-rounded receiver in recent years. After Evans was suspended for Week 3, he has returned to play at a high level despite the Buccaneers’ major struggles on offense.

Our NFL wide receiver rankings for Week 8 sees Samuel take ascend the list after a couple solid performances despite San Francisco’s quarterback issues. During that two-game span, he’s caught 12-of-17 targets for 121 yards.

We’re especially interested to see how Samuel performs moving forward now that Christian McCaffrey is a member of the 49ers. The expectation is that he will see less snaps out of the backfield, creating more opportunities as a true receiver once he returns from injury in Week 10.

It’s been ugly for Adams in his first season with former Fresno State teammate Derek Carr. That was taken to a whole new level with a hobbled Adams catching just one pass on three targets in Week 8’s humiliating shutout loss to the New Orleans Saints.

Adams has indicated he’s frustrated with the Raiders’ start to the season. He previously took said frustration out on an innocent bystander. All of this impacts Adams in our latest NFL wide receiver rankings.

After serving a six-game suspension, Hopkins has returned to dominate for Kyler Murray and the Cardinals. He’s coming off a Week 8 performance in which the former All-Pro hauled in 12-of-13 targets for 159 yards despite Arizona falling to the Minnesota Vikings.

Even after missing those first six games, Hopkins finds himself on pace to catch 121 passes for 1,441 yards. That’s simply incredible. Though, his three drops on 27 targets this season matches his total from the previous two years combined.

However, the stud youngster is coming off an absolutely brilliant two-game run that saw him catch 15 passes for 262 yards and four touchdowns. Chase is now sidelined for between 4-and-6 weeks due to a hip injury. That’s all sorts of unfortunate.

The reigning NFL Offensive Player of the Year and Super Bowl MVP, Kupp opens the 2022 season No. 1 in Sportsnaut’s NFL wide receiver rankings. For good reason. The former third-round pick from Eastern Washington led the league in receptions, yards and receiving touchdowns a season ago. He was simply dominating in every possible way.

Talk about an epic performance catching passes from Matthew Stafford. Unfortunately, 2022 has been somewhat of a differentstory for Kupp and the struggling Rams. Stafford has thrown four interceptions when targeting the wide receiver through seven games. That’s more of a product of Stafford’s performance in that he’s forcing the ball to his only viable receiving threat.

Acquired from the Tennessee Titans in a blockbuster NFL Draft deal, Brown now joins DeVonta Smith as another elite-level weapon for Jalen Hurts in Philadelphia. Brown joined his former Mississippi teammate in DK Metcalf in proving skeptics wrong after being selected in the second round of the 2019 NFL Draft. What he’s done since is remarkable.

That’s been taken to a whole new level in 2022 after Brown was acquired from the Tennessee Titans in an off-season trade. Brown continues to make sweet music with Hurts as the quarterback boasts a 121.8 passer rating when targeting his new receiver. Brown is also coming off an absurd 156-yard, three-touchdown performnce in last week’s blowout win over the Pittsburgh Steelers.

Waddle has been even better as a sophomore, providing improved quarterback Tua Tagovailoa and Miami’s other quarterbacks with another electric target. He’s coming off a brilliant eight-catch, two-touchdown performance against the Detroit Lions in Week 8 and is now on pace for north of 1,500 receiving yards. That’s absurd for a sophomore.

Back in 2020 with Buffalo, Diggs led the NFL in receptions (127) and receiving yards (1,535) while hauling in an otherworldly 77% of his targets and dropping a mere five passes. Diggs picked up where he left off with brilliant performances to open the 2022 season, including a six-catch, 108-yard outing against the Packers in Week 8.

The 2022 season has been about as good for Mr. Jefferson. After some struggles in September, he’s been on a whole new level recently. Over the course of the past four games, Jefferson has caught 34-of-42 targets for 506 yards. He’s now on pace to catch 127 passes for 1,826 yards. This has Jefferson near the top of our NFL wide receiver rankings heading into Week 9.

Last season with Patrick Mahomes tossing him th rock in Kansas City, Hill brought in 70% of his targets. He also put up a mere 4.4% drop rate on 159 targets. He’s been even better in South Beach this season. In fact, Hill is on pace to haul in 146 passes for 2,042 yards. The latter would break Calvin Johnson’s single-season NFL record set back in 2012.

Let us know what you think about Sportsnaut’s NFL wide receiver rankings in the comments below.