The biggest shock of the NBA trade deadline was the Dallas Mavericks sending Kristaps Porzingis and a second-round draft pick to the Washington Wizards for Spencer Dinwiddie and Davis Bertans. James Harden was traded to the Philadelphia 76ers, by the way.

Porzingis’ arrival is compelling for both the Wizards’ present and future. From a value standpoint, this trade is a bit puzzling on the Mavericks’ side. Sticking with the Wizards, though, it’s a steal.

Here’s why Kristaps Porzingis is a slam dunk acquisition for the Wizards.

Related: Winners and losers from the NBA trade deadline

Kristaps Porzingis can be reborn on the Washington Wizards

Frankly, Porzingis was in the midst of his worst season with the Mavericks. He has been inefficient and his fit alongside Luka Doncic still hasn’t produced an enviable result. On the other hand, Porzingis is an elite talent who’s still 26.

Once upon a time ago, Porzingis was one of the NBA’s premier offensive big men and a budding star. With a wrist injury ending Bradley Beal’s season, Porzingis presumably becomes the focal point of the Wizards’ offense.

Porzingis is a highly skilled offensive player. He’s accustomed to sinking perimeter jump shots/stretching the floor, putting the ball on the floor and skying above the rim. Although he has a lacking post game, Porzingis is a versatile offensive threat and a plausible shot blocker.

The Wizards’ opening night backcourt has been traded/is out for the foreseeable future (Spencer Dinwiddie and Bradley Beal). This situation forces Porzingis to deal with a variety of looks intended to slow him down, similar to his final active season with the New York Knicks. There’s no one ahead of him in the scoring department for the rest of the season. It’s baptism by fire — in a good way.

At his best, Porzingis is a force to be reckoned with and an impact player. Given the players he could be around next season, there’s a reasonable chance he can be such a threat once again.

Bradley Beal, Kristaps Porzingis can be a dynamic duo for the Washington Wizards

Beal has been loyal to the Wizards, and the front office keeps reshaping their roster to get a better team around him. Chances are Porzingis’ arrival at least somewhat piques Beal’s interest in staying with the franchise (Beal has an opt-out in his contract for the 2022-23 NBA season). Let’s say that Beal re-ups with Washington: he and Porzingis are an exciting one-two scoring punch.

Yes, Porzingis would revert back to being a No. 2 scorer. That said, he has the next two months to get up to speed and back to peak play. If and when that happens, the Wizards have a lively scoring duo on their hands. Beal, who’s also in the midst of a rough season for his standards, is the team’s leading scorer while Porzingis scores inside and out and stretches the floor for the former.

In a way, the two stars need each other. Beal needs a teammate who can drop 20 points on a nightly basis, and Porzingis desperately needed a change of scenery. Both players have also never won a playoff series as the clear-cut best player on their respective team.

All the while, the Wizards have a reasonable amount of talent around the two stars. Kyle Kuzma is an energetic scorer. Rui Hachimura has been a respectable frontcourt scorer for the better part of his NBA career. Daniel Gafford is a steady inside player on both ends of the floor. Deni Avdija can run the floor. Rookie Corey Kispert is a capable shooter. Kentavious Caldwell-Pope is a proven commodity. If they miss the playoffs, the Wizards have a lottery selection in this year’s NBA Draft.

These skill sets can coexist alongside Beal and Porzingis.

Dinwiddie was having a debut season with the Wizards that left much to be desired. Based on inefficiency and low production, Bertans entered Thursday with the most burdensome contract on the Wizards’ payroll. Is Porzingis’ $30-plus million salary over the next two and a half years ideal? Of course not, but he has upside.

What’s the worst outcome for the Wizards? If Porzingis doesn’t have a profound impact on head coach Wes Unseld Jr.’s offense, they should be able to move him at next season’s trade deadline given his contract getting closer to an expiration date. They traded two repulsive contracts for a player who’s capable of better performance. 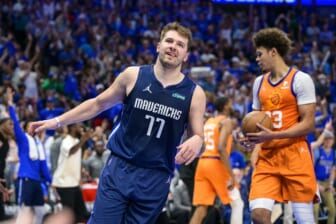 The same logic applies if Beal leaves and the Wizards subsequently blow up their roster (they traded Dinwiddie, Bertans, Montrezl Harrell and Aaron Holiday before the trade deadline) in that they should be able to move Porzingis. Maybe a team with cap flexibility like the Oklahoma City Thunder or Detroit Pistons would have interest?

A team with championship aspirations like the Mavericks isn’t trading a player like Porzingis unless they’re desperate to move on or feel he isn’t integral to their success. But from Washington’s perspective, he’s the perfect reclamation project.

This move could go down as the greatest heist in Wizards’ history — or a footnote in NBA transactional history if they change course. One way or another, this is an enticing, no-brainer move for Washington.