Two members of the Los Angeles County Fire Department are facing termination and a third is headed for a suspension for allegedly taking graphic photos at the scene of the helicopter crash that killed Kobe Bryant and eight others in 2020.

According to court documents filed Monday, an investigation by the LACFD found two of its firefighters took photos of the bodies at the crash site. The inquiry also reportedly uncovered that the unidentified firefighters then sent the photos to a LACFD media relations officer and later with off-duty firefighters who showed them to wives and girlfriends a few weeks after the deadly crash.

Vanessa Bryant, Kobe’s widow, filed a federal lawsuit against L.A. County seeking damages after sheriff’s deputies shared morbid photos from the crash site with friends and a bar patron. Bryant’s attorney disclosed in the recent court documents that the LACFD sent “intention to discharge” letters to the two firefighters in December and a third employee received an “intention to suspend” letter.

California Gov. Gavin Newsom signed a bill in September that makes it illegal for first responders to take unauthorized photos of victims killed at the scene of an accident or crime.

The fatal helicopter crash on Jan. 26, 2020, killed Kobe Bryant, his 13-year-old daughter Gianna Bryant, along with Gianna’s teammates (Alyssa Altobelli, 14 and Payton Chester, 13) along with five others.

The NTSB released its final report on the fatal crash in February, stating its investigation determined the accident was caused by the pilot’s poor decisions and led to him experiencing spatial disorientation, resulting in lost control of the aircraft and causing the crash.

Vanessa Bryant is suing the helicopter company, Island Express, in federal court over the wrongful death of her husband and daughter. 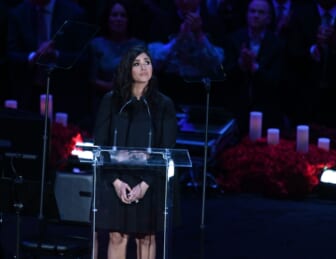