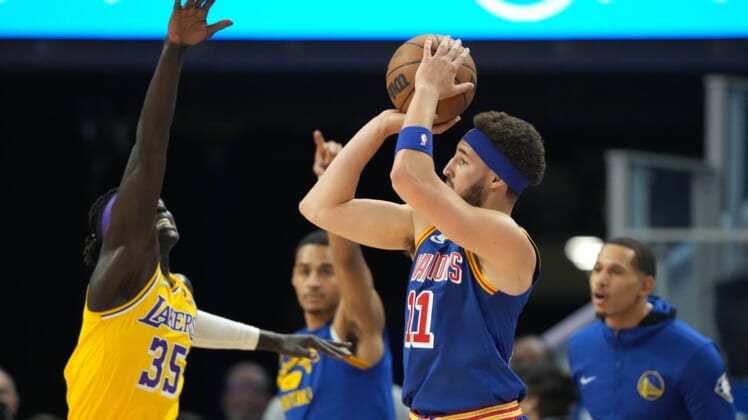 Klay Thompson continued a hot stretch with a team-high 33 points and the host Golden State Warriors rallied late in the third quarter to claim a 128-112 victory over the superstar-depleted Los Angeles Lakers on Thursday night.

Jordan Poole saw a 17-game run of 20-point performances come to an end, but he posted a 19-point, 11-assist double-double for the Warriors (51-29), who increased their lead over the Dallas Mavericks (50-30) to a full game with two remaining in the battle for the No. 3 playoff seed in the West.

Playing without LeBron James, Anthony Davis, Russell Westbrook and Carmelo Anthony, the Lakers (31-49) got a career-high 40 points from Talen Horton-Tucker in a surprisingly competitive effort in the wake of playoff elimination two nights earlier.

Seeking to end a seven-game losing streak, the Lakers led 81-78 in the seventh minute of the third quarter before going scoreless for nearly five minutes.

Golden State took advantage, getting a tying 3-pointer from Andrew Wiggins, a go-ahead driving hoop from Draymond Green and two subsequent jumpers from Thompson in a 13-0 burst that opened a 91-81 advantage.

The Lakers got no closer than seven in the final period.

Andre Iguodala added to the passing display with seven assists to complement five points, while Green also had seven assists with his 10 points.

Horton-Tucker connected on 15 of 28 shots on his big night, which produced a whopping 12 more points than his previous career high of 28, against the Chicago Bulls in November.

Dwight Howard tallied 16 points and a game-high 12 rebounds for the Lakers, while Malik Monk totaled 24 points and Austin Reaves 12.