Kevin Harvick set for redemption at Bristol in 2022

Kevin Harvick is in a must-win situation going into the final race of the Round of 16 and Bristol is here at the right time. Why is Harvick set for a big night? 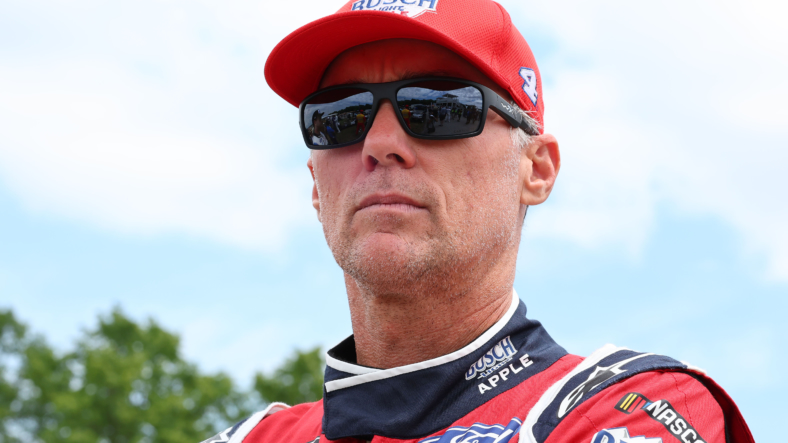 Kevin Harvick sits 35 points below the cut-line heading into the final race of the Round of 16 at Bristol Motor Speedway. While Harvick certainly remains in must-win territory, there are reasons to feel confident about winning.

Why is the driver of the No. 4 car set for a big-time comeback this Saturday night?

Harvick’s previous statistics at the paved Bristol Motor Speedway certainly set up the scene for what is going to potentially be a thrilling event on Saturday night. It dates back to the last two races at the track.

Over the last two paved races at Bristol Motor Speedway, the 46-year-old driver has the most top-5 finishes, laps led, average finish, and total points. The average finish of 1.5 might be the most telling factor of his dominance at the venue.

Harvick dominated the race in 2020 after leading 226 laps out of the 500-lap event. It was his first top-5 finish on the paved track since the 2017 season. However, that was not an outlier as the 2021 season almost produced another victory.

The driver of the No. 4 car led 71 laps en route to a second-place finish behind eventual champion Kyle Larson. It was a major race for both Harvick and Stewart-Haas Racing after the pair had been struggling over the course of the year.

Harvick came close to victory but it was not enough to beat Larson. Coincidentally, this might be the biggest sign that he will have a very competitive car this weekend. Harvick’s worst year in a very long time almost produced a victory at Bristol.

Looking at Harvick’s statistics at Bristol Motor Speedway from a wider range of view, he has the most top-10 finishes and total points at the venue in the last 10 paved events.

There was a slight stretch of mediocre finishes between the good runs, but it appears those are out of the way at a very crucial time for the No. 4 team.

Related: Kevin Harvick speaks the truth about the NextGen car

Facts that back up Kevin Harvick’s potential at Bristol

Harvick is going to need every last drop of speed if he doesn’t want to make a surprise exit in the Round of 16. There was a point during the season where it looked like he might slightly return to his old form and possibly make the Championship 4.

However, a car bursting into flames at Darlington Raceway and suspension damage at Kansas Speedway put the 46-year-old driver in a must-win situation on Saturday night.

Remember the last short-track event? Harvick barely held on to the victory from a hard-charging Christopher Bell at Richmond Raceway and while the two tracks are not very similar, they are still short tracks.

If a better representation is needed, Harvick was likely going to win at Bristol Motor Speedway last season if not for a damaged Chase Elliott getting in his way after the two tangled from the lead late in the event.

There is a very strong possibility that Harvick has won the last two paved races at Bristol Motor Speedway if not for the incident with Elliott. It would directly pinpoint the favorite to play the upset card for the playoff grid.

Honestly, Harvick winning on Saturday night would not be an upset. It would only upset the playoff grid by knocking another driver out of the picture. In fact, the 46-year-old should be one of the favorites to come home with the victory.

Everything will be on the line coming to the green flag this weekend. There is no reason why Harvick can’t close out the deal and secure a spot in the Round of 12.