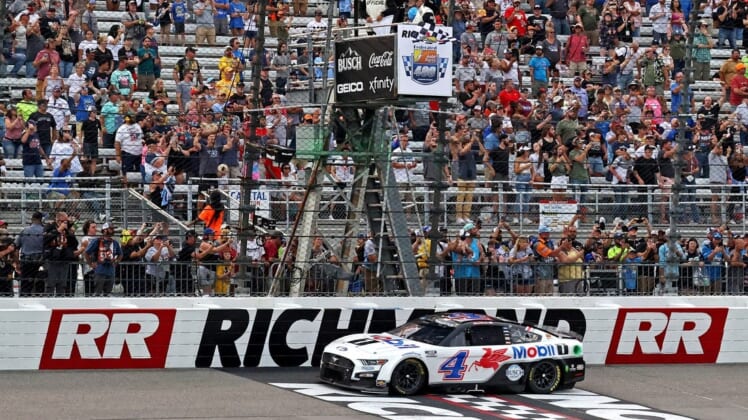 Kevin Harvick, who broke a two-season-long losing streak a week ago, passed Joey Logano and cruised to his second straight victory by winning the Federated Auto Parts 400 at Richmond Raceway Sunday afternoon in Richmond, Va.

The Stewart-Haas Racing driver ran down Logano and roared by the No. 22 Ford with 66 laps to go.

He cycled through one final pit stop, regained the lead on Lap 352 and used his No. 4 Ford to fend off hard-charging Christopher Bell by less than 1/2 second to notch his fourth Richmond win and 60th in the NASCAR Cup Series.

The 60 victories tie him with Kyle Busch for ninth all time in the series.

Harvick, 46, broke a 65-race winless streak last Sunday at Michigan. The drought dated back to the 2020 campaign, when he took the checkered flag nine times.

With Richmond, Watkins Glen and Daytona the only races remaining on the regular-season schedule, the 400-lap event on the 3/4-mile layout represented a good chance for a non-winner to qualify for the 10-race playoff.

Polesitter Kyle Larson quickly lost the lead to Ross Chastain, who set a fast pace around the D-shaped speedway and eventually won the 70-lap first stage.

However, Logano maneuvered his Ford past Chastain soon after the restart, and Chastain’s No. 1 Chevrolet — dominant early — faded back in the top 10.

A two-time winner in 2022, Logano easily distanced the field in the second stage and beat Larson by just under a second to claim the bonus playoff point for the third time this season.

On the restart with Larson and Logano out front, Chastain drifted up and clipped Busch’s No. 18 in Turn 4, forcing both to spin. Erik Jones suffered the worst damage when his No. 43 Chevrolet smacked Chastain’s car.

During green-flag racing, most of the lead-lap drivers forced the field’s hand by pitting with just over 100 laps to go.

But Hamlin, who won at Richmond in the Spring, stayed out and took the lead, followed by Joe Gibbs Racing teammates Bell and Martin Truex Jr. All three Toyotas headed in for service less than 10 laps later.