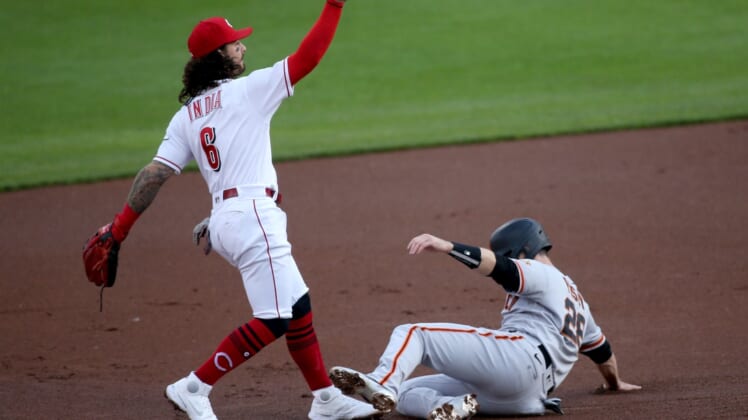 Kevin Gausman surpassed 1,000 career strikeouts and continued his dominating pitching with eight whiffs over six innings, and he combined with three relievers for a three-hit shutout as the San Francisco Giants beat the host Cincinnati Reds 4-0 on Wednesday night.

The Giants will attempt the four-game series sweep on Thursday afternoon.

Gausman is 4-0 for the season and has won all four within his last six starts, while posting a 0.90 ERA and 49 strikeouts. Zack Littell, Jake McGee and Tyler Rogers each added a scoreless inning.

Gausman, like Anthony DeSclafani the night before, had little trouble silencing his former Cincinnati team.

In his April 13 start against the Reds in San Francisco, Gausman allowed five earned runs and four hits over six innings, making Cincinnati the only team to reach the right-hander for more than one run in his nine starts this season.

Gausman retired the first 10 batters he faced on Wednesday before Nick Castellanos worked a one-out walk in the fourth. Tucker Barnhart recorded the Reds’ first hit, a double to left-center, to lead off in the fifth.

The Giants broke the scoreless tie against Cincinnati starter Wade Miley (4-4) in the top of the fifth when Mauricio Dubon doubled deep down the left field line. The next batter, Mike Tauchman, singled Dubon home for a 1-0 Giants lead. Tauchman was thrown out at second on a cutoff play.

Miley, one start removed from his no-hitter at Cleveland on May 7, didn’t make it through five innings against the Giants, allowing one run and six hits over 4 2/3 innings. Miley, who beat the Giants with five shutout innings on April 12, was removed after giving up singles to Gausman and Buster Posey later in the fifth and his pitch count at 81. He struck out two and did not walk a batter.

Lucas Sims came on to get the final out of the inning.

Gausman struck out Kyle Farmer immediately after the Barnhart double for the seventh of his eight strikeouts and the 1,000th of his career. Gausman was pulled after throwing 94 pitches. He allowed one hit and two walks.

Buster Posey continued his red-hot start to 2021 with a key insurance hit in the ninth, a three-run double to left-center off reliever Carson Fulmer. Posey went 3-for-5 and raised his batting average to .374 with an on-base plus slugging percentage of 1.108.