The Brooklyn Nets’ situation is about to go nuclear. Kevin Durant is reportedly monitoring the situation regarding his team and considering his options for the future, according to Shams Charania of The Athletic.

Charania also goes on to note that this leaves the path open for Kyrie Irving to seek a new home via an opt-in and trade.

Talk about a potentially explosive report mere hours before the 2022 NBA Draft is slated to start. We already knew that other teams were keeping a close eye on the Irving situation in hopes that they could put together a trade package for Durant should the former opt out of his contract or request a trade from the Nets.

Brooklyn is coming off an ugly sweep at the hands of the Boston Celtics in the first round of the 2022 NBA Playoffs. This represented the culmination of a disappointing season in the Big Apple that saw the Irving remain away from the team for a vast majority of the season because he opted against getting the COVID-19 vaccine. 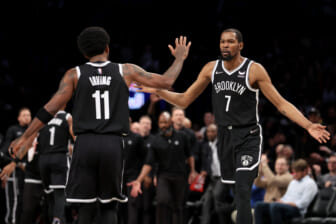 As for Kevin Durant and Kyrie Irving, they have been tied at the hip since coming to the Nets as a packaged deal ahead of the 2019-20 season. In reality, what happens with Irving will impact Durant’s final decisision.

The enigmatic point guard has a player option valued at $36.5 million for next season. Recent reports suggest that things have broken down when it comes to conversations between the two sides, leading to widespread speculation that Irving is done in Brooklyn.

As you can see, the 33-year-old Durant is still playing at an absolutely high level. Multiple contending teams would show interest in the two-time NBA Finals MVP if he were to request a trade.

The interesting thing here is that KD just signed a four-year, $194.22 million extension with Brooklyn back in August of 2021. At that point, he figured both James Harden and Irving would remain teammates over the long haul.

Durant found himself at odds with Harden early in the 2021-22 season, indirectly leading to the latter being dealt to the Philadelphia 76ers for Ben Simmons back on February 10. Months later, and a squad once dubbed as the next super team could be completely broken up after just three years.