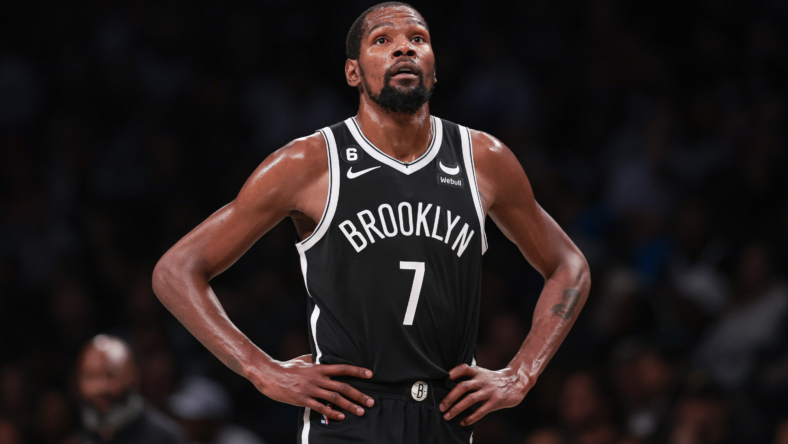 While the NBA community saw this coming, the Brooklyn Nets continue to fail in spectacular fashion during the 2022-23 season. Still, despite the Nets being below .500, Kevin Durant is still playing at a superstar level.

After requesting a trade this past offseason, the Nets front office didn’t care, choosing to hold on to one of the best players in basketball. It’s understandable that Brooklyn would prefer to keep their talent on the roster, the Durant trade rumors are becoming hard to ignore.

From Durant reportedly being upset with Ben Simmons‘s play to the Kyrie Irving distraction to the team’s poor play in general, it’s not hard to envision a scenario where the Nets trade Durant mid-season.

If dealt, the Nets would be able to get a massive trade return for the 12-time NBA All-Star, but not every team has the pieces to contend. With the thought that the 34-year-old would only play for a team built to win now, here are six Durant trade scenarios that could play out this season.

Even after making it to the Western Conference Semifinals, the Memphis Grizzlies are still a team on the rise. Ja Morant gives the Grizz sky-high potential, but there’s been some uncertainty over whether Memphis currently has enough talent on hand to take the next step as a team.

While they’re young and still expected to keep improving, the Grizzlies are a prime candidate to swing a big trade in the next year or two as they cash in on a rich pool of tradeable assets. Desmond Bane is likely considered untouchable in many conversations, yet if Durant becomes available, the smooth-shooting sniper could be the ideal target for Brooklyn.

The Nets would be replacing one slick shooter with another who still hasn’t reached his full potential at just 24 years old. Jaren Jackson also gives the Nets some much-needed size, giving Brooklyn two young pieces to move forward with. Meanwhile, Durant can help show a young roster what it takes to win a ring.

Another team who lacks star power next to Luka Doncic, the Mavs would be wise to add another scoring option who can help shoulder the offensive workload. Adding Durant could help keep Doncic fresh all game long instead of asking their 6-foot-7 ballhandler to play north of 36 minutes per game.

Durant can not only help Dallas become a more polished offensive team, but he’d make the Mavericks a true NBA Finals contender instead of them coming up just short once again. The opportunity to add an elite threat like Durant doesn’t come up often, and with their payroll maxed out, adding a max free agent in the near future isn’t possible.

Yet, if they could exchange a few integral but spare parts for an All-NBA player such as Durant, it’s a no-brainer, no matter how many first-round picks are included.

Related: NBA Rookie of the Year 2023: Paolo Banchero, Bennedict Mathurin ahead of the class

Durantula comes back to the Bay

Perhaps the best trade fit for Durant would be a team and area he’s already familiar with. Even after winning the NBA Championship once again, the Warriors kept coming up in trade rumors for Durant this past offseason. Only, those complications included the possibility of an Andrew Wiggins trade, which just isn’t possible for Brooklyn since they also have Ben Simmons on a designated rookie extension.

In this scenario, we instead look at swapping Klay Thompson for Durant, exchanging shooting guards who both make north of $40 million per season. It may seem absurd to think the Warriors could ever trade Thompson, but with the team’s early struggles, we can’t rule much out.

Adding Durant would immediately give the Warriors one of the league’s most potent backcourts once again. Yet, they may not want to block Jordan Poole’s eventual emergence with a Durant trade either.

Another team that’s frequently been linked to landing Durant is the Miami Heat. We all know just how driven Jimmy Butler is. He wants to win, and obviously Pat Riley and Erik Spoelstra are wired the same way. Yet does the team truly feel they have everything needed to not only push past the Eastern Conference Finals but also be the best team in the NBA?

Instead of counting on Tyler Herro or Butler for the final shot, they would now be able to rely on Durant, who never has trouble creating his own shot. The Nets would be getting a rising star in Herro, who just might thrive if given an even bigger role, plus Jovic, who could very well develop into an extremely skilled big with a bit of seasoning.

If there’s one team who knows exactly what it’s like to make a blockbuster deal that helps push an already solid roster into a championship contender, it’s the Toronto Raptors. Kawhi Leonard’s stay was short, but Durant has the opportunity to make an even bigger impact, as crazy as it sounds.

If the Raptors could manage to steal Durant away without having to part with 2021 NBA Rookie of the Year Scottie Barnes, well that would be a massive coup. It’s unknown just how the Nets plan on approaching their roster build if Durant is traded, but Anunoby and Trent fit almost any situation.

The Brooklyn Nets are undoubtedly going to be seeking superstars in return for Durant, but they tried that already this past offseason and didn’t get anywhere. There’s no reason to believe the Celtics would suddenly be willing to part with Jaylen Brown after what should be considered a successful run-up to the NBA Finals, but as mentioned, Durant is a rare breed.

Outside of Tatum, there is no one who should be considered untouchable on Boston’s roster, and that includes Brown. For the Nets, if they could sneak Brown away from their Eastern Conference rivals, they’d still be in a position to contend and would even be improving their defense immensely.

While the C’s would look like fools to try and break up their roster right now, Durant might be the lone piece that could entice such a wild move to go down.