All-NBA forward Kevin Durant plans to sign a four-year, $198 million extension with the Brooklyn Nets when he becomes eligible later this month.

Durant, who turns 33 next month, is an 11-time All-Star and two-time NBA Finals MVP, when he won titles with the Golden State Warriors in 2017 and 2018. He left the Warriors following the 2018-19 season, which ended in a loss to the Toronto Raptors in the NBA Finals. Durant ruptured his Achilles during the series, causing him to sit out all of 2019-20.

Durant played his first season with the Nets in 2020-21 alongside Kyrie Irving and James Harden, the latter of whom was acquired via trade midseason.

While missing sizeable parts of the regular season with multiple injuries, while also testing positive for COVID-19, Durant played 35 games and averaged 26.9 points, 7.1 rebounds, 5.6 assists and 1.3 blocks per game. 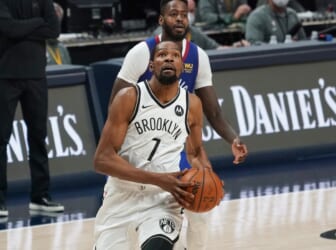 In the 2021 playoffs, Durant recorded 34.3 points per game and dropped 48 in Game 7 of the Eastern Conference semifinals against the Milwaukee Bucks. Though the Nets lost, it marked the highest-scoring individual performance in a Game 7 in NBA history.

According to Boardroom, Durant is declining a player option for the 2022-23 season, while adding four more years through the 2025-26 season.

The extension will take Durant past $500 million in career on-court earnings, the website said.