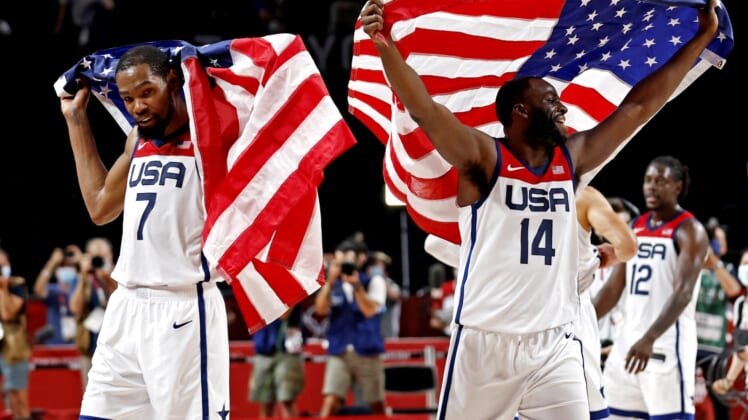 San Antonio Spurs coach Gregg Popovich admitted he was feeling the pressure afterwards, but even as he weathered early adversity at the helm of Team USA basketball for the Tokyo Olympics, the American squad accomplished the ultimate goal.

Durant is notably active on social media — some would argue to his own detriment. However, KD was well within his rights to talk some smack, considering he’s earning the nickname “Captain America” for his legendary Olympic resume.

In addition to becoming Team USA’s all-time leading scorer in Tokyo, Durant added to his legacy with yet another sensational Gold Medal Game performance. He scored 29 points to lead all players, and even as he blasted those who criticized Popovich, Durant and Green gave due credit to France for putting up a tough fight.

Honestly, can you blame Durant for feeling himself just a little bit? The man catches all kinds of grief — admittedly, some of it brought on through his own doing — but he continues to just ball out. Oh, and the Brooklyn Nets just rewarded him with a monster four-year contract extension.

Our NBA playoff predictions are freshly updated. Find out how deep we have KD and the Nets going

So, it’s important to preface this with the previous international struggles Popovich endured over the years when he was part of Team USA at various stages, as documented by The Washington Post‘s Michael Lee:

Then again, the Americans weren’t sending anywhere near their best talent to the 2019 World Cup when they flopped. And Duke coach Mike Krzyzewski was the predominant head of Team USA basketball for so many years, so there wasn’t much room for Popovich to make his own mark.

Dan Wolken of USA Today reported what Popovich said about the pressure of coaching in the Olympics after the U.S. defeated France to ascend to the top of the podium:

Popovich often plays coy, or acts downright defiant towards the media. After exhibition losses to Nigeria and Australia, and a Summer Games opening loss to France, many were doubting whether the coach had the goods to get it done in Tokyo.

From there, Team USA didn’t lose once. And funny enough, Wolken was among the many vocal critics who called out Popovich before the Americans’ eventual, seemingly inevitable Olympic coronation.

Another prominent figure in the sport of basketball who has a, let’s say, complex relationship with the press is Green. The Golden State Warriors veteran wanted receipts for those who slammed Popovich, and Freezing Cold Takes delivered the goods as usual:

Not all of these bad takes are aimed specifically at Popovich, but most of them are. The implication in all of them is that his leadership wasn’t good enough, and it would somehow actually cause Durant and the U.S. team to shrink in the face of any setbacks along the way.

So much for all that.

Now, Popovich and Team USA basketball can just sit back and laugh at all the haters. Even without stalwarts like LeBron James and plenty of other NBA studs who could’ve suited up for the Olympics, Popovich steered the ship admirably well, and got the Americans to peak at the perfect time.