Kevin Durant recorded 29 points and six rebounds and the United States claimed its fourth straight Olympic gold medal with an 87-82 victory over France on Saturday at Saitama, Japan.

Jayson Tatum added 19 points and seven rebounds off the bench as the United States avenged a loss to France in pool play. The U.S. has won 16 gold medals in its 19 Olympic appearances.

Rudy Gobert notched 16 points and eight rebounds and Evan Fournier also scored 16 for France, which won the silver medal for the third time. France lost in the gold-medal game in 1948 and 2000, with both setbacks also against the U.S.

The French team has never won gold in men’s basketball.

Guerschon Yabusele had 13 points, Nando de Colo added 12 points and seven assists and Timothe Luwawu-Cabarrot tallied 11 points for France, which connected on 46.6 percent of its field-goal attempts and made 10 of 31 (32.3 percent) from 3-point range.

Jrue Holiday and Damian Lillard scored 11 points apiece for the U.S., which shot 45.7 percent from the field and was 9 of 32 (28.1 percent) from behind the arc.

He helped put this game away by making two free throws with 8.8 seconds left to give the U.S. the five-point lead. Nicolas Batum missed a 3-point attempt for France, Holiday grabbed the rebound and the Americans ran out the clock.

Earlier in the final stanza, Frank Ntilikina drained a 3-pointer to cap a 7-0 burst as France pulled within 73-70 with 5:44 left.

The United States answered with a 9-2 run, and Tatum finished it with a 3-pointer to make it a 10-point margin with 3:25 remaining. 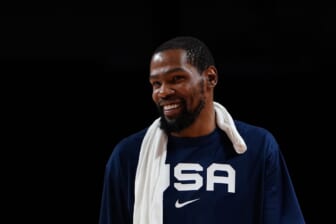 Later in the stanza, the United States’ Zach La Vine scored back-to-back baskets and Tatum followed with a fastbreak dunk to make it 71-57. But Luwawu-Cabarrot and Batum each hit 3-pointers to pull France within eight entering the final stanza.

The U.S. held a 39-26 lead just past the midway point of the second quarter before France cut the deficit to five going into the break.