September 20 was a busy day in the hockey world, with three legendary defenseman in Keith Yandle, Zdeno Chara and P.K. Subban all announcing their retirement in a short time frame.

Each played for multiple teams, primarily in the Eastern Conference, and each was known for their grit and valuable contributions to their teams.

Chara most recently played with the New York Islanders, the place he started his career, before signing a one-day contract with the Boston Bruins in order to retire in the place where he won a Stanley Cup. Subban ended his 13-yearcareer as a New Jersey Devil, and his retirement ended tons of speculation as to his next move. Yandle closed out a 16-year career with the Philadelphia Flyers after being bought out by the Florida Panthers.

These moves came on the same day that Nathan MacKinnon signed an extension with the Colorado Avalanche and became the highest paid player in the NHL, quietly signalling the direction in which the league is heading in terms of a focus on offense and big, speedy forwards that can also add grit and defensive prowess. Nonetheless, Yandle, Subban and Chara all offered valuable contributions to the NHL, and their electric careers each offer some hall of fame-worthy statistics.

Examining the legacy of Keith Yandle

Keith Yandle’s career saw him on the ice more than nearly any player in the same time frame, as the barely-sidelined defenseman held the iron man record in the league until recently. Drafted by the Phoenix Coyotes (now the Arizona Coyotes) in 2005, the Boston-born defenseman played an NHL record 989 consecutive games starting on March 26, 2009.

His streak spanned across a slew of teams, including the Coyotes, New York Rangers, Florida Panthers and, finally, the Philadelphia Flyers. He surpassed the former record of 964 games, held by Doug Jarvis on January 25 of this year before the streak came to end on March 29 when the Flyers announced Yandle would be a healthy scratch.

The announcement of Yandle’s retirement came on the Spittin’ Chiclets podcast, hosted by former NHLer and media personality Paul Bissonnette. Through the span of his career, the 36-year-old defenseman played a total of 1,109 games and posted 103 goals and 516 assists for 619 points. He was known for his prowess on the power play as well as his booming point shot.

Zdeno Chara’s lengthy career saw him become one of the best defensemen of his generation, where he won a Stanley Cup with the Boston Bruins.

“After 25 seasons of professional hockey 1,680 NHL regular season games, 200 Stanley Cup Playoff games, and hundreds of international games I am proud to announce my decision to retire from the National Hockey League. In doing so, I am honored to return to TD Garden today to sign a one-day contract with the Boston Bruins and officially finish my career with the team that has meant so much to me and my family.”

Like Keith Yandle, Chara hopped around the Eastern Conference. His career started with the New York Islanders, the team that drafted him, and then Chara played stints with the Ottawa Senators and the Boston Bruins, as well as a season with the Washington Capitals before returning to play his final season with the Islanders. At 45, Chara was the oldest active player in the league, and is still the tallest person to ever play in the NHL, at six feet nine inches. His career saw him feared for his hockey smarts and offensive prowess, and hold a bunch of elite honors.

Chara is one of four European captains to hoist the Stanley Cup, alongside Detroit’s Nicklas Lidstrom, Washington’s Alexander Ovechkin and, most recently, Colorado’s Gabriel Landeskog. He’s also only captain from Slovakia to do so. He was also a storyline when rejoining the Islanders last season, because he was drafted on June 22, 1996 and his first game with the club was November 19, 1997. He was drafted before the Islanders’ superstar forward Mathew Barzal was born, and played his first game when Barzal was roughly 6 months old.

Hilariously, Chara’s retirement also means that there are no longer any active NHL players who have lost a playoff series to the Toronto Maple Leafs. 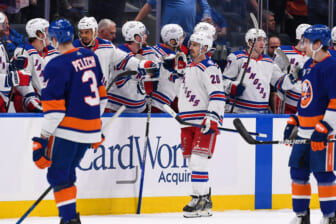 P.K. Subban’s enjoyed a lengthy NHL career that spanned 13 seasons, but is likely just as well known for his electrifying personality. The 33-year old, Toronto-born defenseman was drafted in the second round in 2007 and played with the Montreal Canadiens, Nashville Predators and the New Jersey Devils.

“I remember my dreams of playing in the NHL and winning a Stanley Cup, similar to the guys on the Don Cherry Rock’em Sock’em tapes at the end of every volume, with the black eyes, broken bones, and tears of joy. To this day, I still dream about it. However, the end of this chapter is closing and after 13 years in the NHL, I have made the decision to retire.”

Though he never won a Stanley Cup, Subban made it to the conference finals with the Predators in his first year with the club, and won the Norris Trophy as the league’s top defenseman in 2013. But, Subban also made a name for himself with his efforts off the ice.

“To an amazing league that gave me the opportunity to compete at the highest level with some of the best athletes in the world. The NHL also provided me with a platform that allowed me to give back through my charities,” Subban’s Instagram post continued. His charitable efforts included his eponymous foundation, which donated $10 million to the Montreal Children’s Hospital. He also won the King Clancy Memorial Trophy this year, as a four-time nominee for the award. NHL.com credited his victory to his commitment “to racial and social justice, underserved youth, COVID-19 relief and youth hockey.” Recently, Subban was also featured in the documentary Black Ice.