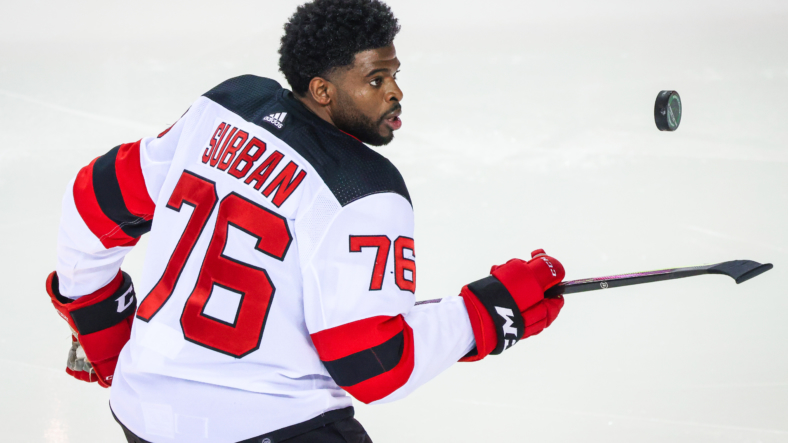 Since 2019, former hockey player Akim Aliu has been outspoken about the racial barriers in hockey. Now, Aliu is taking his message to the red carpet in the form of a documentary called Black Ice, with the help of filmmakers, fellow players, and big-name producers.

His journey began with him calling out former coach Bill Peters and the hockey culture for being less than kind to players of color and has exploded onto the international stage. The film, which was produced by rappers Drake and Future as well as LeBron James and NHLer P.K. Subban, premiered this week at the Toronto International Film Festival and is already embroiled in legal battles.

Black Ice uses Aliu’s battles with Peters as a catalyst to discuss the often-buried racist incidents that occur in hockey leagues of all levels across Canada and the United States. NHL players, including Darnell Nurse, Anthony Duclair, Wayne Simmonds, and Subban, as well as female players like Saroya Tinker and Sarah Nurse, both of whom attended the TIFF premiere events, discuss their earliest interactions with racism in their hockey careers. Their anecdotes serve to contradict the notion that racist incidents in hockey are isolated but rather are connected as a part of the sport’s culture.

While many recognize Willie O’Ree as the first black hockey player, Black Ice–with help from O’Ree himself–tells the story of Herb Carnegie, who, by all accounts, was one of the best players to touch the ice at the time. He was good enough for the Toronto Maple Leafs and then-owner Conn Smythe to notice him. But, there was one problem: he was black, and Smythe’s racist views prevailed, never giving Carnegie, who was then 18, a shot at the big league.

Allegedly, Smythe went so far as saying he’d give any person $10,000 who could “turn Carnegie white.” The film cuts to Carnegie’s response in a CBC interview from 2009, a decade before he passed. “How would you feel?” he said, fighting tears. “I can’t forget it. Because he cut my knees off. He broke my legs. It’s horrible. So I don’t want people to go through that.”

The documentary also details the history of Atlantic Canada’s Colored Hockey League, which existed in the province of Nova Scotia from 1895 to the early 1930s. Brothers George and Darril Fosty detail many of the hockey techniques invented in the Colored Hockey League, from the slapshot to the goaltender’s ability to get down onto the ice to make saves. In Black Ice, they also recount the dismantling of the league as a result of the white players’ intervention and the gentrification of the Halifax area, forcing many of the black players to step away from the game that connected them to the Canadian identity.

Using the history of the Colored Hockey League, though, got Black Ice producers Drake and LeBron James into legal trouble. The pair and their team are being sued for $10 million over intellectual property rights. Legal documents filed in Manhattan state that NBA executive director Billy Hunter holds “the exclusive legal rights to produce any film about the Coloured Hockey League that existed from 1895 to the 1930s.”

“While the defendants LeBron James, Drake and Maverick Carter [LeBron’s business partner] are internationally known and renowned in their respective fields of basketball and music, it does not afford them the right to steal another’s intellectual property,” the lawsuit continues. Regardless, Black Ice continued its week-long premiere festivities at TIFF, complete with Q&As with Aliu, Tinker, Herb Carnegie’s daughter, and director Hubert Davis, who was an Oscar nominee for Hardwood.

Interestingly, there is no comment from a representative for Hockey Canada nor the NHL in Black Ice, despite Davis claiming in a Q&A that he reached out to representatives, presumably from the NHL, for interviews. Aliu chuckled at this, explaining his love/hate relationship with the game and his desire to make the culture better for those around him–a sentiment Saroya Tinker echoes.

Though it demands attention, highlights negative behaviors, and proves that racism happens in all levels of hockey, Black Ice, Davis explains, is about hope. Scenes of Wayne Simmonds explaining to young hockey players of color that it is their game and that they belong, Akim Aliu helping junior hockey player Mark Connors navigate the racism he faces in his career, and Saroya Tinker’s efforts to bring young black women into the game, reflect a belief that the culture can change.

“I’m always going to be a big believer that sports is a microcosm of society, and it pushes us to boundaries that we wouldn’t otherwise be able to get to,” Aliu said in a Q&A. “I hope this turns society into a more loving place.”