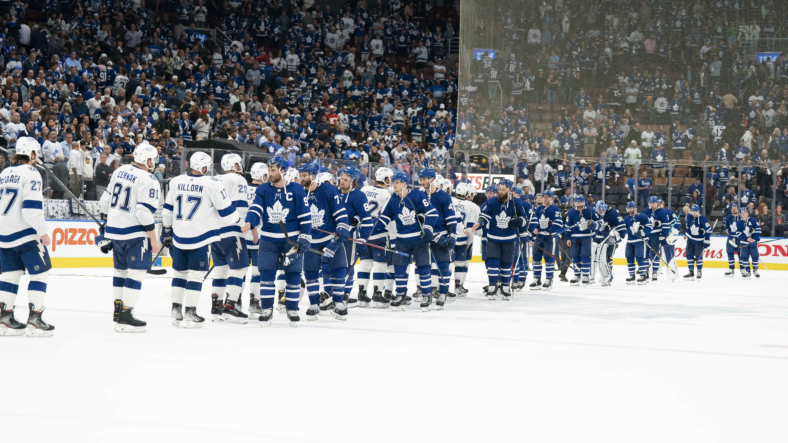 The 2022-23 NHL season is fast approaching, and the league has seen some big shakeups this offseason. The Atlantic Division was one of the strongest last season, hosting the Eastern Conference finalists, the Tampa Bay Lightning, who were involved in a hard-fought battle for the top three spots in the division until close to the end of the season.

While the Bolts were relatively quiet this offseason, other teams like the Toronto Maple Leafs and the Florida Panthers made some big changes this offseason. Ahead of the October puck drop, we take a look at the Atlantic Division’s changes and things to watch.

The Bruins, who always seem to be on the cusp of a deep playoff run without actually getting there, maintained a relatively quiet offseason. The biggest news ahead of the 2022-23 NHL season seemed to be that Patrice Bergeron will not yet retire, and will suit up again for the Bruins for the upcoming campaign. But a recent development in the form of David Krejci’s return from playing in Europe invigorated the squad and gave them hope for a solid first line. This is especially helpful for the Bruins since Brad Marchand will miss the beginning of the season recovering from surgery.

With a first line that’s expected to be David Pastrnak (who is in the last year of his contract), Taylor Hall and Krejci, this team is definitely capable of producing offensively. Offseason acquisition Pavel Zacha will likely assume a bottom six role, strengthening his defensive game and working on the penalty kill. The addition of Hampus Lindholm on the blue line (which came at the trade deadline) ensures a strong back end and a pretty solid power play unit, but the core issues–in the form of goaltending in particular–have not been solved, so it seems an early playoff exit is in the card for Boston yet again.

Speaking of woes, the Buffalo Sabres have done little to catapult themselves from a middle-of-the-division role for the 2022-23 NHL season. The club signed veteran netminder Craig Anderson to a one year deal, though he will definitely not solve any issues in the blue paint. Nonetheless, the Sabres were somewhat of a surprise last season, ending up in the middle of the Atlantic Division instead of the bottom as projected–though that is thanks to some questionable play from other divisional teams.

The club will look to Jeff Skinner, Alex Tuch and Victor Olofsson to contribute offensively for the 2022-23 NHL season. Young star Dylan Cozens will definitely be expected to put up points. Young defensive star Rasmus Dahlin also helps. But this team doesn’t really have much in the form of veterans (besides Anderson) that would send them to the postseason.

With a Steve Yzerman-led rebuild in full swing, the Red Wings were one of the busiest teams this offseason. Forward Andrew Copp struck a deal to head to his hometown when free agency opened, and the goaltending corps was strengthened with the acquisition of former Blues netminder Ville Husso, who stepped into the net when Jordan Binnington struggled last season.

The club also acquired young, promising defenseman Robert Hagg from its divisional rivals, the Buffalo Sabres, to strengthen the blue line. And with captain Dylan Larkin leading the charge alongside another former Blue in David Perron, look for this team to improve for the 2022-23 NHL season. Though, it seems unlikely that they will make the playoffs. But the postseason is in sight and is likely to come for the Red Wings in the near future.

Ahead of the 2022-23 NHL season, the Panthers made one of the biggest moves off the summer, trading Jonathan Huberdeau and Mackenzie Weegar to the Panthers in exchange for Matthew Tkachuk. Though, some (including this journalist) think the Panthers decidedly lost that deal, it’s certainly reasonable to expect their superstars, in the form of Aleksander Barkov and Aaron Ekblad, to carry this team to another postseason run.

The trade deadline acquisition of Claude Giroux helped catapult the team to the top of the league, points-wise, but even he left Florida, opting to head home to Ottawa in a three year deal. So, with a lot of changes and tons of offensive prowess leaving, Barkov, Ekblad and Tkachuk will likely carry a heavy load with some occasional support from Carter Verhaeghe, Sam Reinhart and Anthony Duclair. But without Huberdeau (who was one of the top scorers in the league), the Panthers likely won’t top the league–or potentially even the division–for the 2022-23 NHL season.

The aforementioned Giroux signing brings a veteran presence to the rebuilding Sens, who also hold a Tkachuk brother–Brady this time–on the roster. Of course, the addition of young promising forward Alex DeBrincat accelerates the rebuild, as DeBrincat is the kind of young player a club can build a team around.

Key pieces in Drake Batherson, Brady Tkachuk and Tim Stutzle are also likely to come into their own, putting up strong campaigns for the 2022-23 NHL season, and the few veteran players in Giroux, netminder Cam Talbot and Travis Hamonic add a solid presence to the locker room. Still, the rebuild has not yet paid off enough to see them make the postseason for the 2022-23 NHL season, and they will likely end up close to the bottom of the division yet again.

After a disappointing, bottom-of-the-barrel season from the Habs, the club seems to have made a few changes in order to improve for the 2022-23 NHL season–which shouldn’t be hard. The club acquired Kirby Dach from the Chicago Blackhawks, Sean Monahan from the Calgary Flames (though he is injured), and Evgenii Dadonov from the Vegas Golden Knights.

Unfortunately, Carey Price’s future is still in question, leaving some uncertainty in the goal crease in Montreal. The team claimed Sam Montembeault off waivers last season and, without Price, the duties will be left to him, Jake Allen and prospect Cayden Primeau, which could pose an issue for the 2022-23 NHL season. There are some solid pieces on this roster, from Nick Suzuki to Christian Dvorak to Cole Caulfield, and some promise courtesy of first overall pick Juraj Slafkovsky, but they’re still far from making a playoff run.

The former back-to-back Stanley Cup champions made it to the finals again last season, and will be looking to continue their success for the 2022-23 NHL season. This offseason saw the Bolts acting on the “if it ain’t broke, don’t fix it” mantra, as the summer was largely spent re-signing key pieces like Nick Paul, Mikhail Sergachev, Erik Cernak and Anthony Cirelli. Of course, the team’s big stars in Steven Stamkos, Nikita Kucherov, Brayden Point, Victor Hedman and Andrei Vasilevskiy are staying in Tampa Bay long term, and will definitely be expected to carry the load for the 2022-23 NHL season.

The club also signed a flurry of players to two-way contracts, but has to keep the salary cap in mind as, at the time of writing, they are over the cap by roughly $7 million. Nonetheless, the team is still at its peak and is expected to make another deep playoff run in the upcoming campaign.

Perhaps the biggest story of this club’s offseason was losing fan-loved netminder Jack Campbell as he makes his way to Edmonton ahead of the 2022-23 NHL season. Veteran forward Jason Spezza also retired and, to replace him, the club signed a flurry of players, including Calle Jarnkrok and Nicolas Aube-Kubel up front, to fill the void. The team’s blue line also saw a slight overhaul with the signings of Victor Mete and Jordie Benn, as well as contract extensions being awarded to deadline acquisition Mark Giordano as well as Timothy Liljegren.

Of course, the team’s struggle to make it past the first round is well-documented, and playoff heat often finds the superstar players in Auston Matthews, Mitch Marner and John Tavares, alongside William Nylander and Morgan Reilly. The team hopes that Aube-Kubel’s grit complements Wayne Simmonds’ tenacious gameplay, and that Giordano’s veteran presence on the blue line can change their narrative for the 2022-23 NHL season.