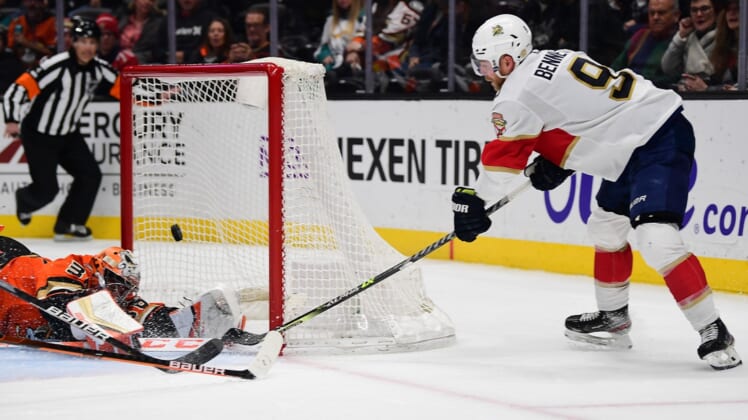 Star forward Claude Giroux is among three trade acquisitions set to make their debuts for the Florida Panthers on Thursday night against the host Montreal Canadiens.

The Panthers acquired Giroux from the Philadelphia Flyers prior to the NHL trade deadline on Monday. They also picked up defensemen Ben Chiarot and Robert Hagg from the Canadiens and Buffalo Sabres, respectively.

Florida, which leads the NHL in most goals scored, figures to be even more dangerous with Giroux. The 34-year-old was placed on the top line and the No. 1 power-play unit in Tuesday’s practice.

“Everyone is excited,” Panthers captain Aleksander Barkov said. “(Giroux) is a great player. He did a lot in Philly.”

Giroux was a first-round pick in 2006 and had been the longest-tenured captain in Flyers history. He led the Flyers in points seven times, and he finished top-three in the league in 2012, 2014 and 2018.

Chiarot, 30, is considered the second-biggest move made by the Panthers at the deadline, and he has nine points (two goals, seven assists) in his past nine games. The 6-foot-3, 235-pounder led Montreal in ice time during the playoffs as the Canadiens made an improbable run to the 2021 Stanley Cup Final.

Hagg, 27, was Philadelphia’s second-round pick in the 2013 NHL, and he knows Giroux well since he only left the Flyers after last season. Hagg collected 13 goals and 34 assists to go along with a plus-13 rating during his time in Philadelphia.

“We’ll welcome them really well,” Barkov said. “We have great guys (already on the roster), on and off the ice.”

Indeed, the Panthers lead the Atlantic Division standings with 90 points.

Montreal, meanwhile, is last in the Atlantic with just 44 points.

Former star player Martin St. Louis, 46, is the new coach, and he has directed Montreal to a 9-6-3 record.

“Given the circumstances,” St. Louis said, “it was a really good effort by our team.”

This season’s team has had very little good luck.

Goalie Carey Price has been out all season due to knee surgery. Top defenseman Shea Weber has also not played this season due to injuries, and reportedly is likely to retire.

So, Montreal is rebuilding around young forwards Nick Suzuki, 22, and rookie Cole Caufield, 21. Suzuki leads Montreal in goals (17), assists (29) and points (46), while Caufield is second on the team in points with 30.

Florida beat Montreal 5-2 in the teams’ only meeting this season.