Kawhi Leonard has missed each of the first five games of the Los Angeles Clippers’ Western Conference Finals series against the Phoenix Suns with a knee injury he sustained in the previous round.

According to Chris Haynes of Yahoo! Sports, Leonard will not return in this series. That’s the bad news. The good news? He has a chance of returning for the 2021 NBA Finals should Los Angeles somehow advance past the Suns.

“Kawhi Leonard is not ruling out a return at all in this postseason,” Haynes noted.

A lot will have to happen in order for Leonard to see the court again in the playoffs. First off, Los Angeles must win Game 6 Wednesday evening at home in order to force a decisive Game 7 in Phoenix on Friday.

Given how well Paul George has played with Leonard sidelined since the Utah Jazz series, there’s a decent chance the Clippers are able to force a Game 7 on their homecourt. Whether that means they’ll be able to go into Phoenix and come out with a win Friday evening remains to be seen. 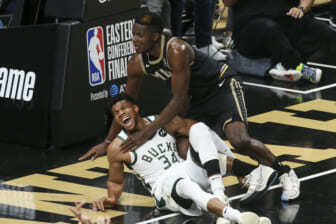 Also Read:
4 reasons the 2021 NBA Playoffs should have an asterisk

Prior to going down with a sprained knee in the Jazz series, Kawhi Leonard was averaging 30.1 points, 7.7 rebounds and 4.4 assists on 57% shooting in the playoffs.

Given the injuries we’ve seen thus far in these playoffs, getting Leonard back for a hypothetical Finals matchup against either the Atlanta Hawks or Milwaukee Bucks would be big.