After the Phoenix Suns failed on their first chance to close out the Western Conference finals, the Clippers will bring renewed life into Game 6 on Wednesday at Los Angeles.

The Clippers cut the Suns’ series lead to 3-2 on Monday with a 116-102 triumph in Phoenix as they attempt to overturn a 2-0 deficit for the third straight time this postseason.

Los Angeles dug out of holes against the Dallas Mavericks in the first round and Utah Jazz in the conference semifinals.

“We thrive in this moment,” Clippers forward Paul George said. “We come together even more so in these moments. This team is just made up of toughness, all across the roster. We’re going to give it everything we got and we’ll live with the results.” 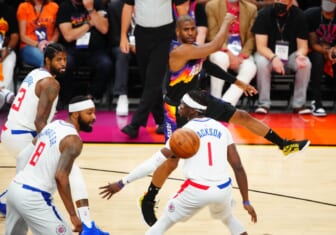 George scored 30 second-half points and a career-playoff-best 41 overall on 15-of-20 shooting to fuel Monday’s series-extending victory. He will again be expected to carry the load Wednesday with Kawhi Leonard (knee) out for the eighth straight postseason contest.

Clippers big man DeMarcus Cousins, who scored 15 points in 11 minutes during Game 5, said nobody should be surprised with Los Angeles’ resiliency.

“That’s how we’re built. We’re built for this moment and we’re not afraid of it,” Cousins said. “We’re OK with our backs against the wall. I think that’s when we come out and show our best.”

Phoenix didn’t fare well in Game 5 when it was in position to clinch its first NBA Finals appearance since 1993. 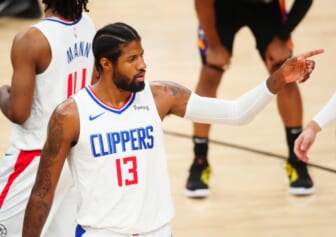 The Suns fell behind 20-5 over the first five-plus minutes and didn’t play like a team truly intent on finishing off the Clippers.

“The desperation has to be there. That’s the deal,” Williams said. “Just because you have a lead in the series doesn’t mean you can show up and they’re going to give it to you. We have to understand that, and I think we do now. We will be better when we show up the next time we play.

“But (the Clippers’) desperation, their competitive edge was consistent for 48 minutes. We did it in spurts, and we certainly didn’t start the game with it.”

Suns star guard Devin Booker, who is playing with a broken nose, scored 31 points on Monday for his second-best effort of the series.

The Game 5 loss had a similar feeling to him.

“They came out, they punched us in the face to start the game and I think we showed it at spots,” Booker said. “But they’re not going to go away easily, so we have to be locked in from beginning to end.”

“We definitely need to be better,” Paul added.

The Suns split the two games at Los Angeles, falling 106-92 in Game 3 before bouncing back for an 84-80 victory two nights later.

The Clippers now have the opportunity to tie the series and force a Game 7 on Friday night in Phoenix.

“The group of guys we’ve got, I love those guys,” Los Angeles coach Tyronn Lue said. “They compete every single night no matter who is on the floor. The work’s not done, but we came into a hostile environment and got a gritty win.

“We’ve got to do it again two more times.”