4 reasons the 2021 NBA Playoffs should have an asterisk

The NBA has received rightful flack for all of the injuries we’ve seen happen during the 2021 NBA Playoffs. These injuries have come after a shortened regular-season slate that forced teams to play a 72-game schedule in roughly 150 days due to the COVID-19 pandemic.

“They all didn’t wanna listen to me about the start of the season. I knew exactly what would happen. I only wanted to protect the well being of the players which ultimately is the PRODUCT & BENEFIT of OUR GAME! These injuries isn’t just ‘PART OF THE GAME’. It’s the lack of PURE RIM REST rest before starting back up. 8, possibly 9 ALL-STARS has missed Playoff games(most in league history). This is the best time of the year for our league and fans but missing a ton of our fav players. It’s insane,” James wrote in a series of Tweets earlier in June.

Since then, injuries have become even more of a part of the NBA Playoffs with the conference finals in full bloom. Leonard has missed each of the first five games of the Clippers’ Western Conference Finals series against the Phoenix Suns.

Recent developments back east now add another layer to the issues the NBA is having as it relates to keeping star players healthy.

Immediately ahead of their must-win Game 4 outing against the Milwaukee Bucks in the Eastern Conference Finals, Young was ruled out with a bone bruise in the foot. Atlanta was trailing 2-1 in the series and had to take Game 4 at home in order to make this a series.

Young, 22, has been absolutely dynamic in his first foray into NBA Playoff action, averaging 29.8 points and 9.5 assists in 15 games. He’s entered stardom right in front of us, dominating on a nightly basis and sending the likes of the New York Knicks and Philadelphia 76ers packing. Unfortunately, Game 5 of this series was also defined by another injury.

Giannis Antetokounmpo is the death knell for the NBA Playoffs

In the third quarter of his teams outing against the aforementioned Hawks, this two-time NBA MVP went down in a heap of pain following an alley-oop attempt. He was down on the hardwood for minutes inside State Farm Arena in Atlanta, only to be helped to the locker room.

The Greek Freak was almost immediately ruled out for the remainder of the game with a hyperextended left knee. Now that the Hawks were able to tie this series up at two by virtue of a 110-88 win, everything is up in the air back east. Given how quickly he was ruled out and the seriousness of the initial injury report, it’s highly unlikely Giannis Antetokounmpo will be able to return in the series.

More so than ever, injuries have impacted the NBA Playoffs

The list of players who have missed time to injury during the playoffs would make up an all-time great roster. That’s not hyperbole.

That’s absolutely ridiculous, and it has impacted the NBA Playoffs at a level we’ve never seen before. Injuries to Kevin Durant and Klay Thompson for the Golden State Warriors in the 2019 NBA Finals might have impacted their ability to win a fourth title of the since-bygone dynasty. But seeing these injuries take place ahead of the Finals takes everything to a whole new level.

How the heck are we going to look at the eventual 2021 NBA champion in a different manner? We’re not saying LeBron James and Co. winning the title last year in the Orlando Bubble was fraudulent. But others have come to that conclusion.

Take the Phoenix Suns as an example. They defeated the aforementioned Lakers in Round 1 with Anthony Davis injured. Phoenix then took out the Denver Nuggets in the conference semifinals with star guard Jamal Murray sidelined to an ACL injury and Michael Porter Jr. nowhere near 100%. The Suns are now mired in a difficult conference finals matchup with the Kawhi Leonard-less Los Angeles Clippers.

Let’s say the Suns come out on top after losing Game 6 at home. How can we not place an asterisk by their title should they go up against the Hawks or Bucks without either teams’ stop star? Consider that for a second. 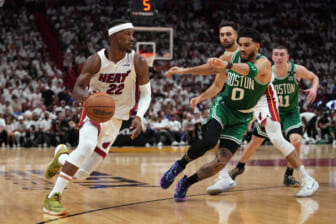 This isn’t to take away from the eventual champion. Phoenix winning its first title since 1993 would be a remarkable accomplishment. The Clippers, riding the hot hand of Paul George, winning without Kawhi would be absolutely huge. Meanwhile, either of the Eastern Conference squads hoisting the Larry O’Brien Trophy at seasons’ end would be great.

In no way does this mean that the NBA Playoffs have not been defined by injuries more than anything else. It could ultimately lead to many placing an asterisk next to the name of the eventual champion. And in reality, Commissioner Adam Silver and Co. are to blame for this.