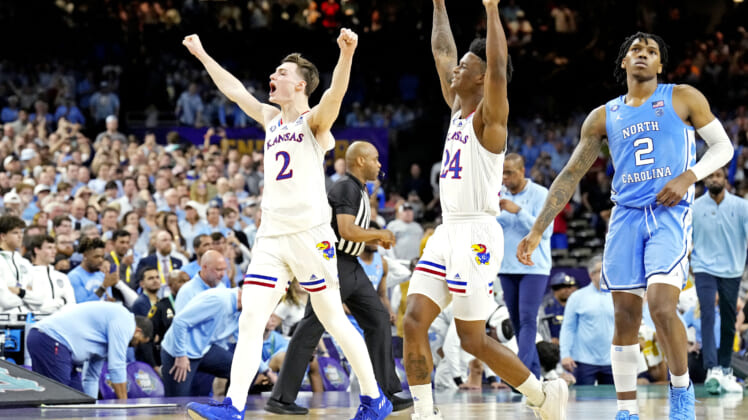 David McCormack and the Kansas Jayhawks found themselves down 40-25 at halftime against North Carolina in the men’s basketball national championship Monday evening in New Orleans.

Favored heading into the game, that’s when Kansas decided to overwhelm the Tar Heels by outscoring Hubert Davis’ squad 47-29 in the second half to pull off the biggest comeback in the history of the championship game.

It was back and forth in the second half with the two sides exchanging leads. That’s when senior forward David McCormack scored two consecuive late buckets to give the Kansas Jayhawks a thrilling 72-69 win.

For a former top-30 recruit from Oak Hill Academy, this represented the culmination of a career that saw him play limited minutes in his first two seasons in Lawrence.

Kansas’ comeback win also didn’t come without controversy in the end. Up by three with four seconds left, Dajuan Harris Jr. turned the ball over for the Jayhawks.

It gave North Carolina guard Caleb Love an opportunity to tie the game in what might have been his last shot as a member of the Tar Heels. Unfortunately for North Carolina, he missed the shot.

This gave the Kansas Jayhawks their first NCAA title since all the way back in 2008. It also comes two years after Kansas might have lost out on winning the title when the 2020 season was canceled due to the COVID-19 pandemic.

As for David McCormack, he finished the evening with 15 points on 7-of-15 shooting while grabbing 10 rebounds in his final game as a member of the Jayhawks.