Julius Randle collected his sixth triple-double of the season Saturday afternoon and gave the host New York Knicks the lead for good by opening overtime with a pair of free throws as the Knicks remained in the mix for the fourth seed in the Eastern Conference with a 117-109 win over the Charlotte Hornets.

The Knicks (40-31) can finish fourth if they beat the Boston Celtics in Sunday’s season finale and the Miami Heat lose one of their final two games.

The Hornets (33-38) lost their fourth straight but got some help from the Los Angeles Lakers in their bid to finish eighth in the East. The Lakers’ 122-115 win over the Indiana Pacers means Charlotte can lock up eighth place by beating the Washington Wizards on Sunday.

The seventh- and eighth-place teams in each conference only have to win one game in the play-in tournament to advance to the playoffs.

Randle had 33 points, 13 assists and 10 rebounds for the Knicks while Reggie Bullock scored 17 points. Derrick Rose (15 points), Alec Burks (14 points) and Immanuel Quickley (13 points) all got into double digits off the bench.

After Randle’s free throws to open overtime, he collected an offensive rebound that led to a 3-pointer by Burks that gave the Knicks a 109-104 lead. Bridges responded with a layup, but Bullock drained a 3-pointer on the next trip and New York was never threatened thereafter.

The Knicks led by as many as 18 in the second quarter and opened the third quarter on a 10-2 run to go up 73-56. Bridges began the Hornets’ comeback by scoring eight unanswered points and had 16 points in the 30-13 run that ended the quarter and pulled Charlotte — which made 10 of its final 12 shots of the period — within 89-86.

The Hornets remained red-hot to open the fourth, during which they scored the first seven points. Malik Monk’s runner gave Charlotte its first lead at 90-89 before Graham sank a 3-pointer.

Burks scored four straight for the Knicks to tie the score before the Hornets hit their next four field goal attempts to take a 101-97 lead on Rozier’s layup with 6:45 left. But Charlotte began going cold and the Knicks scored seven straight — the final five by Randle — to go up 104-101 before going scoreless from the field the remainder of regulation. 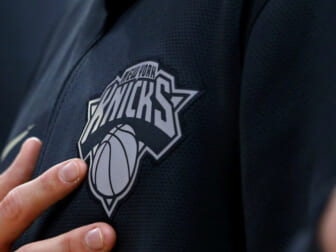 The Hornets missed four straight shots over a span of more than six minutes until Rozier’s game-tying layup with 37.8 seconds left. Randle missed a 3-pointer on the next trip — New York’s sixth straight miss — and Rozier missed a fallaway before Graham hoisted an airballed 3-pointer just before the buzzer.