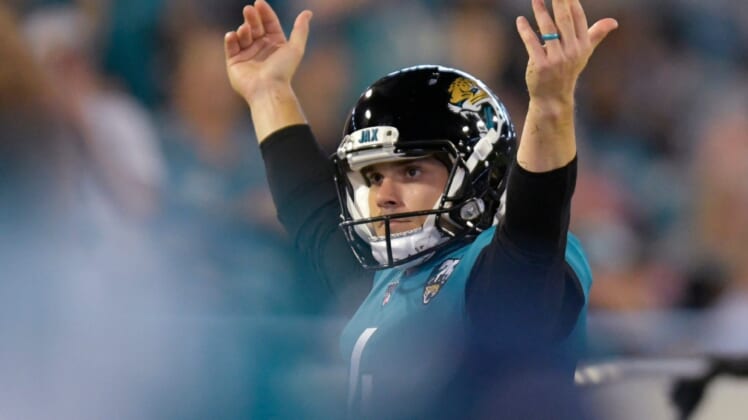 Remember hearing about the former Jacksonville Jaguars kicker Josh Lambo accusing his one-time head coach Urban Meyer of kicking and verbally assaulting him back in December? Yeah, it was a wicked story.

Here’s a quick refresher about the basis of Lambo’s claims.

“I’m in a lunge position. Left leg forward, right leg back. Urban Meyer, while I’m in that stretch position, comes up to me and says, ‘Hey Dips–t, make your f–king kicks’ and kicks me in the leg.

I don’t care if it’s football or not, the boss can’t strike an employee. And for a second, I couldn’t believe it actually happened. Pardon my vulgarity , I said, ‘Don’t you ever f**king kick me again!’ And his response was, ‘I’m the head ball coach, I’ll kick you whenever the f**k I want.’”

Lambo then immediately made his agent aware of the incident, who passed it along to the Jags’ legal counsel the following day.

Hours after the report emerged in the Tampa Bay Times, the Jags decided to part ways with Meyer just 13 games into a five-year contract signed in January of 2021.

Now according to the Tampa Bay Times, Josh Lambo has filed a lawsuit against his former employer and is seeking compensation for his $3.5 million salary he was set to earn during the 2021 NFL season, in addition to the damages he suffered due to emotional distress.

The lawsuit suggests Lambo’s on-field performance was negatively impacted by Meyer’s actions and that the team created a hostile work environment to perform in.

“Mr. Meyer’s hostility had the intended effect on Mr. Lambo, resulting in Mr. Lambo uncharacteristically missing difficult and long kicks from the ranges of fifty-five yards, fifty-two yards and fifty-eight yards,” according to the lawsuit.

Since Lambo first told the Jaguars’ legal counsel of the alleged abuse and the team released him from the roster shortly after the report was made, the lawsuit states the franchise is in direct violation of Florida’s Private Sector Whistle Blower’s Act.

Despite his release, Lambo still holds his place as the sixth-most accurate kicker in NFL history by field-goal percentage.

“Multiple skilled players missed assignments, dropped passes or otherwise failed to perform on-field directly resulting in the Jaguars’ game losses. However, Mr. Lambo, the player who objected to the unlawful activity of Mr. Meyer, was the only player Mr. Meyer and the Defendant (the Jaguars) cut from the roster.”

Lambo said Meyer even threatened to take his job away after the kicker let his coach know how he felt about the abuse.

“You’re the first player I’ve ever let speak to me that way in my career, and if you do it again, you’re gone.”

As the lawsuit notes, any employer who allegedly physically strikes an employee at work, while threatening to repeat the act when faced with resistance, is illegal under Florida civil and criminal law.

Meanwhile, when Meyer was still employed by the Jaguars, he denied Lambo’s characterization of the scuffle that may or may not have happened.

“Josh’s characterization of me and this incident is completely inaccurate, and there are eyewitnesses to refute his account,” Meyer said. “(General manager) Trent (Baalke) and I met with him on multiple occasions to encourage his performance, and this was never brought up. I was fully supportive of Josh during his time with the team and wish him nothing but the best.”

Lambo is aiming for a jury trial and is looking for a judgment to be issued awarding him back pay from his 2021 salary paid with interest, in addition to “compensation for any special damages sustained as emotional stress and reputational harm and litigation fees.”