Josh Allen passed for 179 yards and two touchdowns to lead the Buffalo Bills to a 35-0 shutout of the host Miami Dolphins on Sunday afternoon.

The Dolphins (1-1) lost quarterback Tua Tagovailoa in the first quarter due to a rib injury. He was hit while trying to pass as defensive end AJ Epenesa beat Dolphins right tackle Jesse Davis on the play.

Tagovailoa completed 1 of 4 passes for 13 yards with no touchdowns or interceptions before leaving the game.

Jacoby Brissett, who replaced Tagovailoa, completed 24 of 40 passes for 169 yards, no touchdowns and one pick. 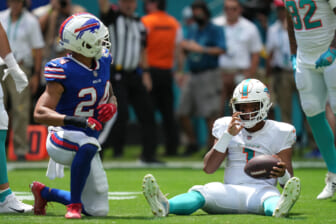 Aside from Brissett’s interception, the Dolphins made numerous mistakes, including lost fumbles by Jakeem Grant and rookie first-round pick Jaylen Waddle. In addition, the Dolphins turned the ball over on downs four times and were penalized nine times for 83 yards.

Buffalo scored on its first possession as Singletary broke off a 46-yard run.

On the ensuing possession, Miami went for it on fourth-and-2 at Buffalo’s 48, but that’s when Epenesa’s unobstructed hit on Tagovailoa broke up the play.

Buffalo capitalized on the short field and drove 52 yards for a 14-0 lead. The money play was Allen’s 5-yard TD throw to Stefon Diggs. Allen scrambled to his right before connecting with Diggs in the middle of the end zone.

The Bills took the second-half kickoff and drove 75 yards for a 21-0 lead. The drive was capped by Allen’s 8-yard scoring strike to Dawson Knox.

After Miami turned the ball over on downs a third time, Buffalo needed to go just 41 yards to make it 28-0. Moss ran 7 yards to conclude the drive.

Moss added a 1-yard touchdown run with 7:45 left in the game.

It was the first time the Dolphins were shut out since a 43-0 loss to the New England Patriots in Week 2 of 2019.