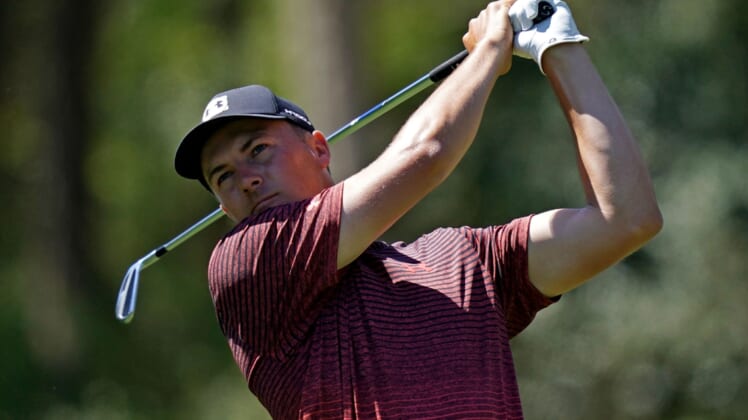 Jordan Spieth will happily tee it up against one of the hottest players in the world Wednesday in his opening match of this week’s World Golf Championships-Dell Technologies Match Play event.

It sure beats sitting at home during last month’s WGC event.

Spieth didn’t qualify for the WGC-Workday Championship at The Concession after his world ranking fell as low as 92nd earlier this year. He has rebounded to No. 52 on the strength of four top-15 finishes in his past five starts and Spieth is the No. 49 seed this week.

“That hit me pretty hard,” Spieth said Monday of failing to qualify for the first WGC event of 2021. “I didn’t like that at all … not being able to play in it being because of world ranking.

“It lit a fire that I hope to progress forward and not miss many more.”

As promising as Spieth’s recent form has been as he seeks his first victory since The Open in 2017, his issues on Sundays remain a consistent theme.

After Spieth opened with consecutive 68s at the Genesis Invitational in his next start, he slipped to rounds of 73 and 71 over the weekend. He has posted a 75 on Sunday in his two most recent starts.

Spieth had a stellar match play resume as an amateur and while he hasn’t enjoyed the same success in WGC match play, he said he enjoys the format. It is held at the Austin Country Club, where he played numerous times growing up in the Dallas area and attending the University of Texas.

“I’m glad to be here with a chance,” said Spieth, who will open against 15th-seeded Matthew Fitzpatrick on Wednesday. “I’ve got a tough first-round matchup on Wednesday and that’s kind of where my mind’s at right now. I’ve got to go out and play phenomenal golf against somebody who’s been playing some of the best in the world.”

Spieth also has 20th seed Matthew Wolff and No. 37 Corey Conners in his group.

“Obviously when you play well, you’re happier,” Spieth said of his recent form. “You play poorly you’re not as happy. That’s just the way it goes.”