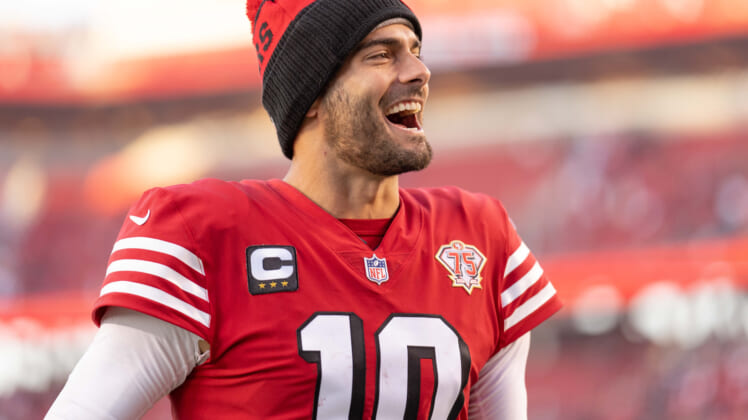 About that whole Jimmy Garoppolo divorce with the San Francisco 49ers? It seemed imminent for the entire 2022 NFL offseason with San Francisco opting to go with Trey Lance as its starting quarterback.

That is no longer the case. On the eve of NFL cut down day, ESPN’s Adam Schefter is reporting that Garoppolo has agreed to a restructured deal with the San Francisco 49ers that will keep him with the team in 2022.

The report indicates that Garoppolo will receive a $6.5 million base salary with a $500,000 roster bonus. He also has playing time bonuses that could pay him upwards of $16 million for the 2022 season. The restructured deal includes a no-trade and no-franchise tag clause, meaning Garoppolo will be free to sign with another team next offseason.

From San Francisco’s perspective, this move saves a whopping $19.9 million against the cap in 2022. It gives the team more financial flexibility moving forward.

Jimmy Garoppolo and his shocking return to the San Francisco 49ers

We have to be clear here. San Francisco will be starting Lance Week 1 against the Chicago Bears. Garoppolo will return as QB2 and as insurance in case Lance struggles or is injured behind a questionable offensive line.

Even then, this has to be seen as surprising news for the two sides. A divorce seemed imminent throughout the entire 2022 offseason with Garoppolo remaining away from OTAs and training camp and Lance getting all of the first-team reps.

During this span with San Francisco, Garoppolo has posted a 31-14 record as a starter while leading San Francisco to two NFC Championship Games and a Super Bowl appearance.

Some will conclude that this is an indictment of Lance as San Francisco’s unquestioned starter in 2022. That could very well be the case internally. However, Garoppolo had no other starting opportunities around the NFL after undergoing off-season shoulder surgery. That became clear when his trade market dried up.

It makes sense for the veteran quarterback. If he is able to see extensive action this season, Garoppolo’s market in free agency next March will take off. Being able to remain with a team in which he has a first-hand knowledge of the offense adds another layer to this.

From San Francisco’s perspective, it retains a veteran backup with a wealth of experience. The team had been rostering Nate Sudfeld and rookie seventh-round pick Brock Purdy behind Lance. Retaining Jimmy Garoppolo changes the dynamics big time.