Indianapolis Colts owner Jim Irsay, a highly-respected individual around the league, did not hold back on Tuesday when talking about the potential removal of Washington Commanders owner Daniel Snyder.

In speaking with the media following Tuesday’s owners meeting, Irsay indicated that “there’s merit to remove him (Snyder) as owner” of the Commanders.

Irsay’s comments come at a time when there’s renewed push from those around the NFL to force Snyder into selling the Commanders after years of controversy surrounding the organization. Snyder continues to face allegations of sexual misconduct within the confines of the organization with several former employees having come forward in recent months.

Most recently, a report from ESPN indicated that Snyder had hired private investigators to look into wrongdoing on the part of other owners. The idea here would be for the embattled figure to have something to hold over the heads of said owners. Irsay doesn’t seem to be too worried about that.

“He can investigate me till the cows come home, it’s not going to back me off,” Jim Irsay on perceived threats from Daniel Snyder.

The Commanders responded in kind with a statement to Sportsnaut from a team spokesperson.

“It is highly inappropriate, but not surprising, that Mr. Irsay opted to make statements publicly based on falsehoods in the media. It is unfortunate that Mr. Irsay decided to go public with his statement today, while an investigation is in process, and the team has had no opportunity to formally respond to allegations.

The Commanders have made remarkable progress over the past two year(s). We are confident that, when he has an opportunity to see the actual evidence in this case, Mr. Irsay will conclude that there is no reason for the Snyders to consider selling the franchise. And they won’t.”

Statement from Commanders spokesperson to Sportsnaut about Irsay’s comments 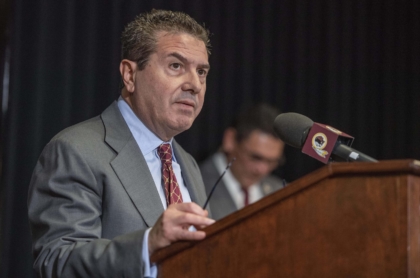 Irsay did indicate to reporters on Tuesday that there could be enough votes (24) among NFL owners to remove Snyder from the ranks of NFL higher-ups. This comes amid anothe report earlier on Tuesday indicating that a majority of owners support Snyder being forced to sell the Commanders.

“I was told this week by somebody who is familiar with the ownership thinking that, if you took a straw poll of owners right now, certainly most of them would prefer that Daniel Snyder not own the team anymore.”

Earlier in the week, suggestions came out that the D.C. District Attorney’s Office is concluding its investigation into Snyder and the Commanders. Said report from the Washington Posted indicated that further action could be taken against Mr. Snyder. For their part, the Commanders responded in a statement to Sportsnaut via a spokesperson.

“The team’s lawyers have met with counsel at the Attorney General’s office on multiple occasions, and no one from that office has ever indicated that the office is planning to take any action against the team or Dan Snyder.

The Commanders organization has cooperated fully with the investigation, including by voluntarily producing over a hundred thousand documents, because it has nothing to hide. The anonymous leaks are unconscionable, and DC Attorney General Racine should confirm that the leaks didn’t come from any member of his office or anyone affiliated with his office.”

Commanders spokesperson to Sportsnaut on the Washington Post report

As for Jim Irsay, he’s been the Colts owner since taking over for his late father back in 1997. He has a lot of sway within the NFL power elite.